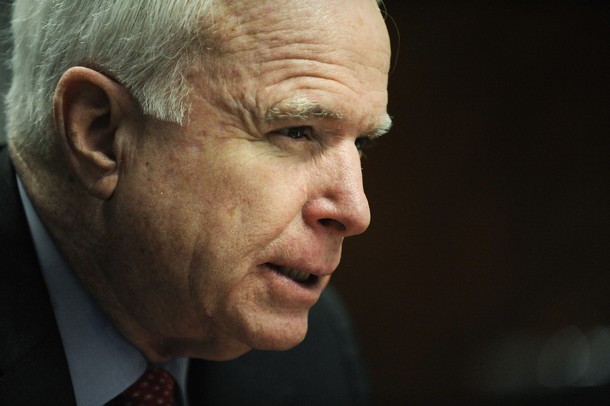 From the Office of John McCain:  [A]t the request of the Syrian National Council, the Free Syrian Army, and Local Coordinating Committees inside the country, the United States should lead an international effort to protect key population centers in Syria, especially in the north, through airstrikes on Assad’s forces. To be clear: This will require the United States to suppress enemy air defenses in at least part of the country.

The ultimate goal of airstrikes should be to establish and defend safe havens in Syria, especially in the north, in which opposition forces can organize and plan their political and military activities against Assad. These safe havens could serve as platforms for the delivery of humanitarian and military assistance – including weapons and ammunition, body armor and other personal protective equipment, tactical intelligence, secure communications equipment, food and water, and medical supplies. These safe havens could also help the Free Syrian Army and other armed groups in Syria to train and organize themselves into more cohesive and effective military forces, likely with the assistance of foreign partners.

The benefit for the United States in helping to lead this effort directly is that it would allow us to better empower those Syrian groups that share our interests – those groups that reject Al-Qaeda and the Iranian regime, and commit to the goal of an inclusive democratic transition, as called for by the Syrian National Council. If we stand on the sidelines, others will try to pick winners, and this will not always be to our liking or in our interest. This does that mean the United States should go it alone. We should not. We should seek the active involvement of key Arab partners such as Saudi Arabia, U.A.E., Jordan, and Qatar – and willing allies in the E.U. and NATO, the most important of which in this case is Turkey.

There will be no U.N. Security Council mandate for such an operation. Russia and China took that option off the table long ago. But let’s not forget: NATO took military action to save Kosovo in 1999 without formal U.N. authorization. There is no reason why the Arab League, or NATO, or a leading coalition within the Friends of Syria contact group, or all of them speaking in unison, could not provide a similar international mandate for military measures to save Syria today.

Could such a mandate be gotten? I believe it could be. Foreign capitals across the world are looking to the United States to lead, especially now that the situation in Syria has become an armed conflict. But what they see is an Administration still hedging its bets – on the one hand, insisting that Assad’s fall is inevitable, but on the other, unwilling even to threaten more assertive actions that could make it so.

The rhetoric out of NATO has been much more self-defeating. Far from making it clear to Assad that all options are on the table, key alliance leaders are going out of their way to publicly take options off the table. Last week, the Secretary-General of NATO, Mr. Rasmussen, said that the alliance has not even discussed the possibility of NATO action in Syria – saying, quote, ‘I don’t envision such a role for the alliance.’ The following day, the Supreme Allied Commander, Admiral James Stavridis, testified to the Senate Armed Services Committee that NATO has done no contingency planning – none – for potential military operations in Syria.

That is not how NATO approached Bosnia. Or Kosovo. Or Libya. Is it now the policy of NATO – or the United States, for that matter – to tell the perpetrators of mass atrocities, in Syria or elsewhere, that they can go on killing innocent civilians by the hundreds or thousands, and the greatest alliance in history will not even bother to conduct any planning about how we might stop them? Is that NATO’s policy now? Is that our policy? Because that is the practical effect of this kind of rhetoric. It gives Assad and his foreign allies a green light for greater brutality.

Excerpt from remarks by Senator John McCain on the situation in Syria on the floor of the U.S. Senate.  (photo: Reuters)