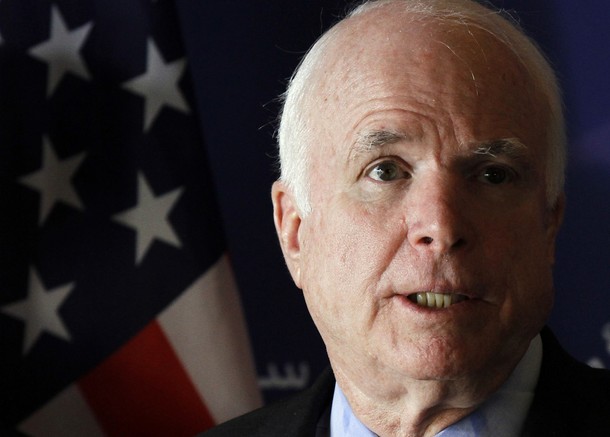 From John McCain, Office of Senator McCain:  Our European allies remain our preeminent security partners. And today, EUCOM and NATO are being called upon to bear an ever greater responsibility for diverse international security challenges – from Afghanistan and Libya, to cyber threats and transnational terrorism, to ballistic missile defense and the strategic balance of forces on the continent. We must be mindful of the enduring value and impact of our European alliances as we evaluate changes to our force posture.

In its recently released defense strategy, the Defense Department has proposed the withdrawal of an additional Brigade Combat Team from Europe. At the same time, this draw down of forces is complemented by new U.S. military commitments to Europe – including a brigade-sized contribution to the NATO Response Force, new rotations of troops for joint exercises and operations, the installation of a ground-based radar in Turkey, and the stationing of four ballistic missile defense-capable Aegis ships in Spain. Overall, this seems like a prudent realignment of our forces and commitment in Europe.

Amid the growing global focus of U.S. European Command, we must remember that the vision of a Europe whole, free, and at peace will remain unfulfilled so long as the country of Georgia remains forcibly divided and occupied by Russian forces. Georgia is an aspiring member of NATO and one of the largest contributors of forces to the Afghanistan mission. And yet, our bilateral defense relationship remains mired in the past. As a bipartisan report led by two members of this Committee, Senators Jeanne Shaheen and Lindsey Graham, concluded last year, the United States needs to build a more ‘normal’ defense relationship with Georgia, including defensive arms sales in coordination with our NATO allies.

At a time of uncertainty in Russia, when lashing out at manufactured foreign enemies remains a tempting way to garner domestic legitimacy, it is not in America’s interest to leave Georgia without adequate means to defend itself. It is for this reason that the Congress included a provision in the National Defense Authorization Act last year that requires the Department of Defense to provide the Congress with a strategy for the normalization of the U.S.-Georgia defense relationship, including the sale of defensive arms. We look forward to Admiral Stavridis updating us on the development of that strategy.