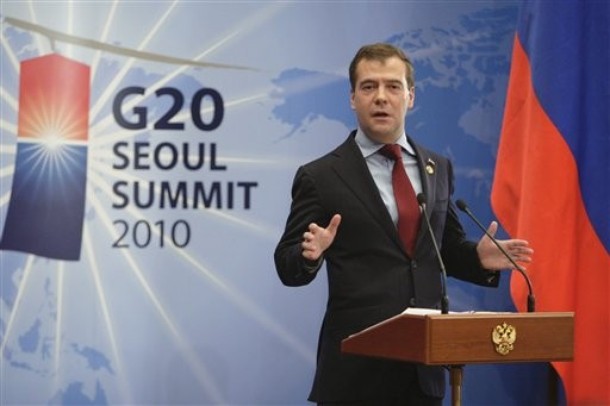 From the AP:  Russia’s president suggested Friday changes to the country’s spy agency are coming in the wake of this summer’s arrest of agents in the United States and a report that a top Russian intelligence officer helped capture them.

At a news conference in Seoul, South Korea, Dmitry Medvedev was asked about the report in the newspaper Kommersant.

"There has to be an examination of this … The relevant lessons will be studied," Medvedev said.

The arrests of the 10 agents and the subsequent news that an intelligence officer fled to the United States shortly before have been an embarrassment to Russia’s powerful Foreign Intelligence Service.

Medvedev confirmed the newspaper report, telling reporters, "As far as I am concerned, what was published in Kommersant was not news. I found out about it on the day it happened, with all its attributes. …"

The SVR is headed by Mikhail Fradkov, an ally of Prime Minister Vladimir Putin. Fradkov was one of Putin’s prime ministers when Putin was president. Removing Fradkov could be a risky move for Medvedev, potentially angering Putin’s camp and undermining support for Medvedev if he wants to seek a second term as president.  (photo: AP)