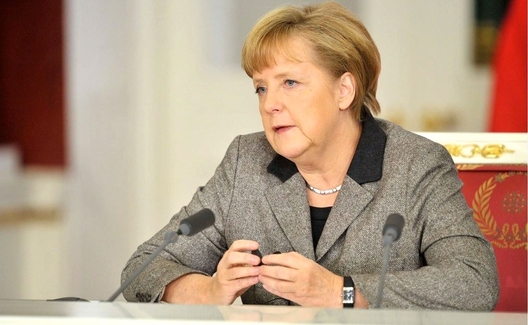 From Deutsche Welle:  “The challenges for NATO have changed drastically in recent years,” Merkel said.

Following the Russian annexation of Ukraine’s Crimea peninsula and Moscow’s support for rebels in eastern Ukraine, Merkel said it was important for NATO to “focus more on defending the alliance.”

“To do that we have to make necessary arrangements, for example through a presence in central and Eastern European countries,” she said.

From Politico: NATO must focus on setting up a presence at the alliance’s Eastern flank to defend itself from potential Russian aggression, German Chancellor Angela Merkel said.

Her remarks, ahead of a summit of NATO leaders in Brussels next week, will be seen as a strong reaffirmation of the military alliance’s relevance and a statement from Europe’s most powerful leader of what she sees as its future direction. There are fears that U.S. President Donald Trump, who will attend the summit and has in the past referred to it as “obsolete“, will next week seek to undermine NATO further….

“Of course, we want to have a responsible relationship with Russia,” Merkel said in the statement, adding “that’s the reason why we will continue to have talks in the NATO-Russia Council.”

At the same time though, the alliance “has to show determination to protect us,” she said.