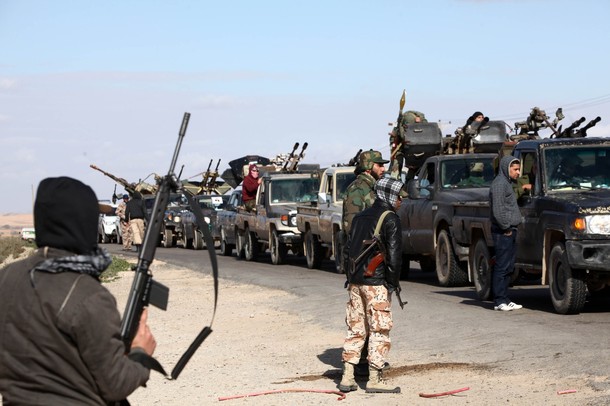 From Nick Meo, and Hassan Morajea, the Telegraph:  Bani Walid, about 100 miles south-east of the capital Tripoli, was a Gaddafi stronghold, fighting defiantly to the bitter end under the direction of his son Saif al-Islam. The town only surrendered after dozens of its young men were killed by rocket barrages which smashed buildings to pieces.

Since its fall in October it has been a place of simmering resentment and occasional violent flare-ups. Then last Monday its tough inhabitants staged an uprising. They overran guards at the main prison, where growing numbers of their friends had been detained, and ejected pro-government forces from the town, killing at least four of them. . . .

Yet this was not the start of a pro-Gaddafi counter-revolution so much as an act of frustration at the high-handed behaviour of the former rebels, who still consider themselves to be freedom fighters.

The town’s inhabitants were tired of the militia men barging into their homes, pushing their wives around and looting their possessions. Even worse were the arrests of suspected Gaddafi officials. Thousands of men have been dragged away across Libya in the past few months to prison and in many cases torture, in some cases for revenge just because they came from a town that was pro-Gaddafi during the war. . . .

Libya has not yet spiralled into Iraq-style chaos. There are no car bombs. The streets are mostly safe, although drug dealing is more open than it was and there is more violent crime than before.

And the NTC can point to successes. One million children are back at school having missed classes during nine months of war and revolution, and the curriculum has been cleansed of Gaddafi-worship. . . .

In effect Libya is still being run by the militias thrown up by the war. An estimated 200,000 young men with no jobs lounge at checkpoints, or continue to scour the desert, armed and dangerous, hunting Gaddafi supporters or any black Africans who might have served as mercenaries in the Gaddafi army.

The NTC has proved unable to disarm more than a handful of the militia men, who show little interest in returning to the more humdrum jobs they held before the uprising. (photo: Getty)