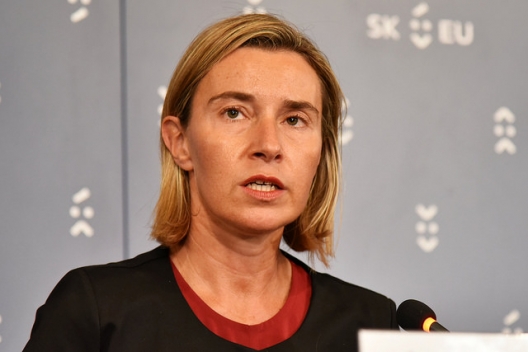 Today there was a general agreement, actually a unanimous agreement, on the fact that not only that the Global Strategy is excellent, but also the plans for implementation are what we need now. So I will provide a clear roadmap by the end of next week on different steps of implementation. I aim at having the first operational results already by Spring next year, when we will have the first report on the implementation of the Strategy. This will include all chapters of our action in the world, meaning in particular the work on conflicts and crises from the very beginning to the very end: prevention, crisis management, crisis solution but also follow-up to crisis and conflicts and building resilience in societies and states around us, in the area around Europe both to the East and to the South but also in faraway places like in Africa and Afghanistan where the European Union is working a lot with our partners to increase the resilience of populations and institutions.

A very important part of our implementation of the Strategy will deal with the nexus between our internal policies and our external work. This is perfectly understandable when we talk about preventing radicalisation and terrorism or dealing with counterterrorism, or migration. A perfect example of what we intend to do is the work we established on migration where we work at the same time on internal measures but also on external long-term investments in countries of origin and transit and anti-smuggling operation.

This is going to be a comprehensive approach but I guess you might be more interested in one part of what I presented today to the Foreign Ministers, which are the plans for the implementation of the part of the Global Strategy that relate to the European defence and security. I presented them a rather detailed menu of options we have within the existing Treaties of the European Union of all possible actions that the European Union can take to increase the level of European defence and security policies. This includes issues that we will put on the table, also of Defence Ministers obviously and also Heads of State and Government. I don’t exclude that at the Bratislava Summit in mid-September the Heads of State and Government might be interested in hearing what we discussed today with the Foreign Ministers when it comes to increasing the Europe of Defence. This includes the definition of our level of ambition, work on capabilities on the military side but also on the civilian side, and this includes also the full use of all our tools already foreseen by the Treaty, including the use of battlegroups for instance or the use of structured cooperation.

I have to say that around the table there was also unanimity on the fact that – including on the issue of defence – the implementation plan I am proposing is going exactly in the direction that we need and I will proceed with this work so that we respond to the needs of our citizens, but also of our partners in the world, that we manage to have a more effective European defence and security.

There were also ideas that I proposed and that I will also elaborate further of using the European Semester to encourage a higher degree of cooperation in the field of security and defence. The idea on which I will work now is to produce an implementation plan on European defence by the end of this year, in parallel with the work that Commissioner Elżbieta Bieńkowska is doing on the European Defence Action Plan and in parallel with the proposals I will present on the implementation of the Joint Declaration we signed with NATO at the Warsaw Summit in July. This could constitute a package on the European Defence and Security to be ready by the end of this year with again not reflections or visions, but concrete proposals for actions.

I will stop here. It was not so brief and I will take a couple of questions….

Q. On global strategy and defence, was there any discussion on the idea of having a European army?

When it comes to the Global Strategy, what we discussed today are very concrete steps to increase the capacity of the European Union to be active and operational in the field of defence and security. As you know, we already have many missions and operations but there is much, much more that we can do at the service of peace and security. The European Union has its own way of interpreting security and defence, which is very much a link between the civil and the military aspects, which is unique and very precious at these times, and we discussed these concrete steps.

We, I think, all agree among the Foreign Ministers that the European Army is not something that is going to happen any time soon, but what can happen very soon, if the Member States are committed, is to advance in the field of European defence with very concrete measures, and this is what I put on the table today. The important thing, I believe, is that all the Ministers, and I repeat all the Ministers, appreciated the plans for implementation and are ready to work constructively, and in a committed way to advance in this respect. So, I see a very clear window of political opportunity from now to next spring to make this file advance.

There were always talks about the Europe of defence and little deliverables in the past years; I think that now it is the time for real stuff and that is why I put on the table these proposals. And again, this is only the beginning; it could be that you will see – even here in Bratislava – very soon some further elements on this.

Excerpts from remarks by High Representative/Vice-President Federica Mogherini at the press point after the first day of the Informal Meeting of EU Ministers of Foreign Affairs in Bratislava.