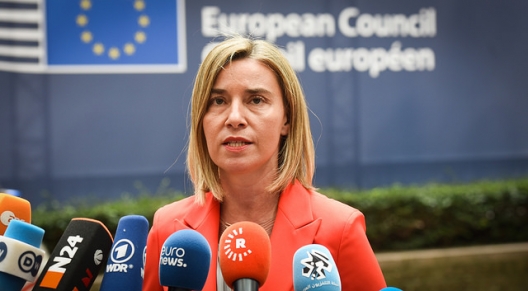 I see the focus on implementation on four specific areas. I will start with the one that might not be the most evident one in the Global Strategy, but I think is the one that has the most clear and evident window of political opportunity in this moment, especially with Member States but also with the Commission and with our citizens which is the work we can do on implementation of security and defence. The Strategy has already opened a debate, you may have noticed this. In the debate over the summer a certain number of Ministers, Prime Ministers, Heads of State, Commissioners, whatever, have come up with ideas on how to build our European Security Union, how to make sure that our defence at a European Union’s level uses all the potential it can have. And I think this is a very positive sign because if we do not have the ownership, the buy-in, the commitment of all stakeholders here starting from the Member States, this will not be a possible way to go.

So, I think that we have the political space today to do things that were not really do-able in the previous years. My intention is to present, before the end of the year, an ambitious, the highest possible ambitious level, an ambitious implementation plan on security and defence, including a few clear elements. One: how we make full use of the existing Treaties, how to make use of the huge potential of what we have already, from an institutional point of view. The Strategy mentions the Battlegroups, and the need to remove the obstacles to their deployment. But we have also other issues like structured cooperation, or how to best implement an article we use already, article 42.7 or an article we have never used, article 44. It is not an exhaustive list: it is just to give you a flavour of what I intend to put on the table.

Second element on security and defence: change our institutional structure because we could have the need also to be imaginative. Because our recent experience shows very clearly, and some of you have experienced it directly, how crucial the cooperation between the civilian and military personnel is. We have seen it in the missions in the Sahel, we have seen it in Operation Sophia, we have seen it in many different fields, we see it in Libya in a very clear way. A more effective joint civilian-military planning might need a specific structure and we will look into this kind of institutional innovation as well.

Third element on the chapter of security and defence: capabilities because we will have to speed up the process towards a truly European defence industry, identifying key strategic activities supported by the European Defence Action Plan. I think that we could look at incentives in that field as well.

Another element, last but not least: working with partners in the field of security and defence. NATO is the most obvious one. We have signed with NATO a joint declaration at the margins of the Warsaw Summit, it is now for implementation. I intend to present proposals for implementation of that Joint Declaration in the coming couple of months. But it is not only NATO because with the United Nations for instance we work a lot on security and defence and many of you see it every day on the ground. This is not in contradiction; working with partners is not in contradiction with strengthening our capacities to work autonomously on security and defence because actually in the world of today the only way in which we, Europeans, can take responsibility for our collective security, and doing our part, our share of responsibility, is through cooperation inside the European Union.