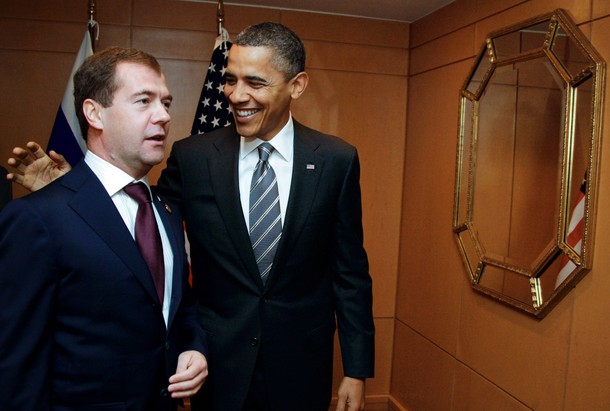 From Stephen Fidler and Gregory White, the Wall Street Journal:  Russian President Dmitry Medvedev will sign an agreement with the leaders of the NATO alliance on Saturday aimed at expanding the use of supply routes through Russia into Afghanistan , as part of an effort to improve ties between the former antagonists. …

"We want this summit to turn the page on the NATO-Russian relationship," said Dmitry Rogozin, Russia’s ambassador to NATO, in an interview. Russia needs predictable relations with the world’s largest political-military alliance, he said. …

The transit agreement with Russia will expand the goods that can be sent on rail routes through Russia to include armored cars, such as U.S. MRAPs, according to NATO officials. Some 4,000 containers have passed through Russia to Afghanistan since 2008, according to NATO and Russian officials, and the number of shipments has accelerated since June.

Supplying Afghanistan from the north is 90% cheaper than airlifting in supplies, and less hazardous than transporting them by truck through Pakistan.

[NATO Secretary General Anders Fogh] Rasmussen said Russia also is expected to permit goods to be shipped out of Afghanistan through its territory.

At the moment, railroad cars return empty from the border with Afghanistan, so that change could be a big help as the alliance reduces its combat role in the country.

Mr. Rasmussen said that only nonlethal materials would be allowed to go through Russia.  (photo: Getty)