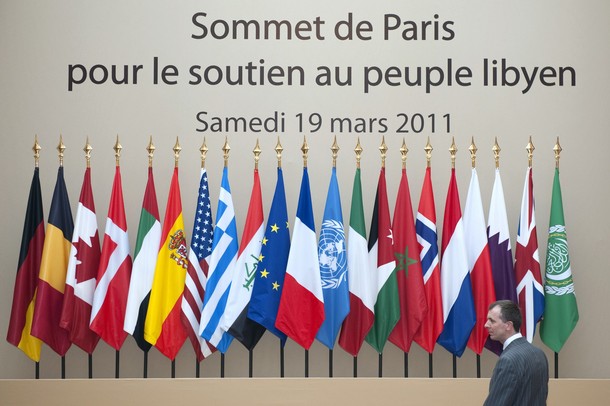 From the Editors of the New York Times:  Mr. Sarkozy needs to step back and let NATO take the lead.

After a phone conversation with President Obama on Tuesday, he seems ready to do so, but the details need to be finalized quickly. French efforts to appear the leader and prime coordinator of that intervention have needlessly strained relations with other participating countries. This is a time for the military coalition to come together, not to splinter. It is irresponsible that the command sequence was not decided before the military operation was launched. …

But if Mr. Sarkozy wants to emerge from this crisis with his international standing still enhanced, the right thing to do is to step back and let a NATO-coordinated combination of the countries taking part in military operations assume command. That kind of hybrid approach has been used before when other countries joined NATO in military action, for example in Kosovo in the 1990s and in Afghanistan today. It is not perfect, but it is better than the alternatives, including France’s pet idea of a council of participating foreign ministers providing political direction while NATO confined itself to military execution. That’s a prescription for paralysis and discord, and possible defections from the coalition.

Italy, for example, is the nearest NATO nation to the Libyan battlefront and the European country with the greatest economic stake in the outcome. It has made clear that it prefers a NATO-led mission to a French-led one. So would Norway, which has refused to participate unless NATO is in charge. And NATO leadership might make for smoother coordination with Turkey, an important NATO member, which plans to send warships but avoid actual combat.

NATO leadership best serves American interests. The United States took the lead in knocking out Libyan air defenses. That made sense because it alone has the cruise missiles for the job. Now the Obama administration rightly wants to hand off military leadership to its NATO partners. Mr. Sarkozy would do himself, and the Libyan democratic cause he supports, a big favor by smoothing the path to NATO leadership.