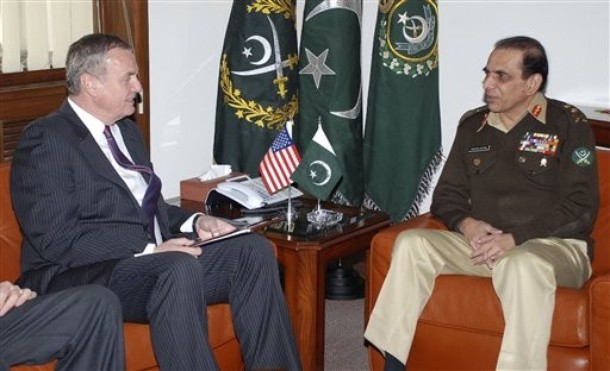 From David Ignatius, the Washington Post:  "These safe havens are a big question mark in terms of our success rate," Gen. Jim Jones, the national security adviser, said in an interview Tuesday at the White House. He noted that the Taliban and its affiliates have used these havens to arm, train, regroup and gather intelligence — confounding U.S. strategy.

The Pakistanis have denied that their intelligence service is aiding the Taliban, and they have noted the raw and fragmentary nature of the Wikileaks information.

But the fact remains that the Taliban continues to operate effectively from bases inside Pakistan — and, indeed, is escalating its attacks. Unless this changes, the American effort in Afghanistan is likely to fail.

Jones praised the Pakistani military for stepping up its operations in the border region over the past 18 months, but he stressed: "There’s much more to do and not a lot of time to do it."

Jones drew on his own travels to the region over the past decade to explain why Pakistan is a "hinge" in the war effort. He noted that from 2003 to 2005, the organized enemy presence in Afghanistan was relatively low, with perhaps 100 al-Qaeda and 3,000 Taliban fighters there.

A "pivotal time" came in 2006, Jones argued, when the Pakistani military decided to "cut a deal" with tribal leaders that allowed the Taliban insurgents to cross freely from Afghanistan if they didn’t attack Pakistani forces. Jones, who was serving as NATO commander at the time, said he was "incredulous" at the truce and warned the Pakistanis it would never work.

Opening this "highway from Afghanistan to Pakistan" allowed the Taliban a "momentum change" from 2007 to 2009, and it began to gain the upper hand, Jones recalled. It’s this continuing momentum that the Obama administration has tried to check with its troop surge.  (photo:  Pakistan’s Inter Services Public Relations Department/AP)