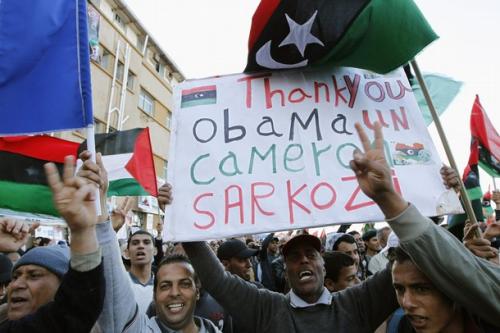 From Anders Fogh Rasmussen, the International Herald Tribune:  The dramatic developments across North Africa and the Middle East remind me of the fall of the Berlin Wall and the end of the Cold War. From Tunis to Cairo to Benghazi, people overcame fear to embrace freedom. Some governments in the region have taken important steps to meet the rightful demands of their citizens. Others realized their time was up and moved aside. But I was appalled to see that in some countries, and especially in Libya, the call for freedom and dignity has been met with state violence.

NATO’s reaction to the crisis in Libya has been quick and resolute. In March, acting under the authority of an historic United Nations Security Council Resolution, the alliance took overall command of military operations to protect the Libyan people against Colonel Muammar el-Qaddafi’s outrageous attacks. Working together with partners, including from the region, we have made significant progress in degrading Qaddafi’s ability to attack civilians and to lay siege to cities.

Some people have asked why NATO acted in Libya but not elsewhere, in particular in Syria. My answer is clear. We took action in Libya because we have a strong mandate from the Security Council and solid support from countries in the region. That is a unique combination which we have not seen elsewhere.