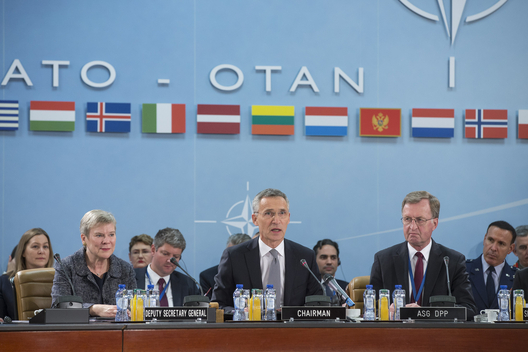 We have just had a very good meeting with the Defence Ministers of the NATO Allied countries.

We took further decisions to continue NATO’s adaptation to the challenges we face.

A key component of our adaptation is a robust and agile command structure. This underpins both our strengthened deterrence and defence posture and our ability to project stability beyond NATO’s borders.

At the Warsaw Summit last year, we decided to launch an assessment of the NATO command structure in light of the changed security environment. To ensure it can do the job across the full spectrum of Alliance missions. Today, we agreed on the outline design for an adapted NATO Command Structure, which will be the basis for further work.

Let me mention some key elements.

A Command for the Atlantic, to ensure that sea lines of communication between Europe and North America remain free and secure. This is vital for our transatlantic Alliance.

A new Command to improve the movement of military forces across Europe. And ways to strengthen the logistical function across the NATO Command Structure. Our military commanders will now flesh out the details. And the results of their work will be presented to Defence Ministers next February.

The adaptation of the NATO Command Structure will further strengthen our ability to reinforce Allies quickly and effectively. But military mobility is not only about new commands. It’s also about the ability to move forces and equipment quickly, with the right transport means and the right infrastructure. Since 2014, we have made good progress in improving national legislation. Removing many bureaucratic hurdles to allow us to move forces across Allied territory. But much more needs to be done. We need to ensure that national legislation facilitating border crossing is fully implemented. We need enough transport capacity at our disposal, which largely comes from the private sector. And we need to improve infrastructure, such as roads, bridges, railways, runways and ports. So NATO is now updating the military requirements for civilian infrastructure.

Of course, military mobility is not just about the military. It requires a whole-of-government approach. So it’s important that our defence ministers make our interior, finance and transport ministers aware of military requirements.

It’s also important that NATO coordinates with the European Union and we are indeed working closely and actively together on this issue. For instance, we share information on standards, requirements, as well as challenges related to civilian infrastructure. So I envisage that military mobility could become a real flagship of NATO-EU cooperation….

So we have the ability to move forces today, but we would like to move more forces more quickly across Europe and then we have to invest more in infrastructure and to meet modern NATO standards.