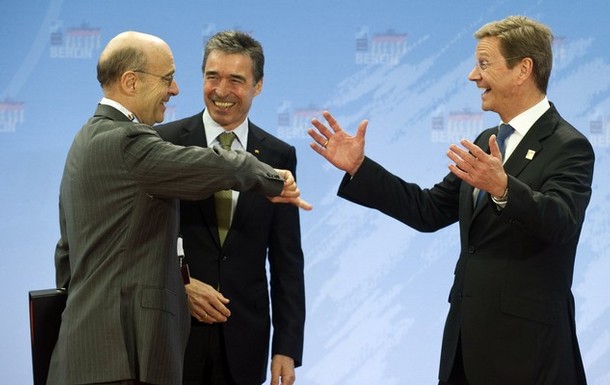 From James Joyner, the New Atlanticist:  In truth, however, the political value in a NATO operation is that the alliance’s name is a stand-in for the developed world and operating under its name confers a legitimacy that national flags don’t. This is particularly the case for Britain and France, whose colonial histories bring enormous baggage in the Middle East and North Africa — not to mention the United States, with its own more recent complicated history in the region. With the notable exception of Russia, NATO does not have imperialistic connotations. In its 62 years of operation, the alliance has deployed its might sparingly: humanitarian protection missions in Bosnia, Kosovo, and now Libya; maritime missions against the Somali pirates; and fighting the Taliban in Afghanistan. While not all uncontroversial, these operations all had widespread international approval.

This is not insignificant. Domestically, the NATO aegis provides assurances to publics — particularly in Europe — that are weary and skeptical of war. Internationally, it takes much of the edge off the use of hard power, making it clear that humanitarian interest, not a thirst for foreign oil, is the motivation for action. It’s true that, in the case of Libya, the call for action by the Arab League and the imprimatur of the U.N. Security Council provided substantial cover, too. But, as the comedian Dave Chappelle memorably pointed out, the United Nations doesn’t have an army. NATO does — or at least its member states do.

This fact does raise the question, however, of whether the existence of an official NATO alliance adds anything to a collective action by countries such as Britain, France, and the United States — which are, after all, allies anyway and supply NATO’s soldiers and military hardware. As the Iraq war demonstrated, the United States and its allies can fight just fine apart from NATO as a coalition of the willing.

But this sort of ad hoc alliance comes with lower legitimacy — as the Iraq war also demonstrated — and without an institutional framework that has benefited from six decades of development. Though NATO’s bureaucracy is a favorite butt of jokes by even the alliance’s staunchest supporters, its existence provides a massive head start. As a standing alliance, NATO has been the main venue for making sure that different countries’ command structures and systems can work together, creating standard operating procedures, and ensuring a degree of uniformity in weapons and equipment. The commencement of a war is a really awful time to work these issues out, as we saw in the first Gulf War and its numerous friendly-fire incidents.

The most militarily significant members of NATO have been working together now for generations. Alliance members constantly train together and, over the last two decades, fight together.

James Joyner is managing editor of the Atlantic Council. This piece was originally published in Foreign Policy.  (photo: Getty)