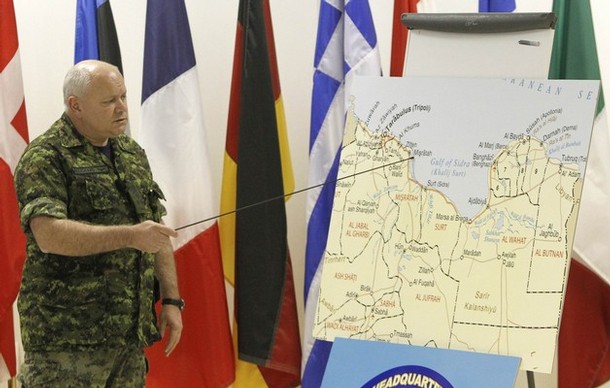 From NATO:  Early on 6 June 2011 NATO aircraft struck a command and control target in Tripoli, specifically a key Qadhafi regime intelligence headquarters building. In a coordinated deliberate strike on the Qadhafi national intelligence centre, NATO aircraft delivered precision-guided weapons as part of a campaign which continues to degrade Qadhafi’s ability to commit crimes on his own people.

The combined air operation was achieved by NATO aircraft working together in the skies above Libya to complete the mission. Every day fast jets deliver precision-guided weapons on selected targets and each mission is a culmination of extensive planning. Other aircraft on this mission included a NATO air-to-air refueling platform, which delivered aviation fuel to the jets both before and after the mission and a NATO E3A Airborne Warning and Control System aircraft provided control for the aircraft above Tripoli. Prior to the mission, NATO intelligence, Surveillance and Reconnaissance aircraft were collecting information activity across Libya, whilst other aircraft provided suppression of enemy air defences to protect NATO asset.

“As long as Qadhafi continues to threaten civilians, NATO will maintain the pressure upon his regime and will continue to degrade his ability to attack the population of Libya,” said Lieutenant-General Charles Bouchard, Commander of Operation Unified Protector.  (photo: Reuters)