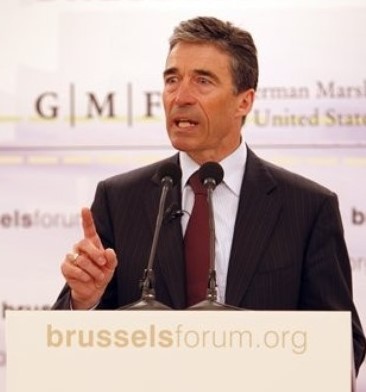 From Zaman:  NATO Secretary-General Anders Fogh Rasmussen has called on the European Union to bring Turkey into the bloc’s defense development arm and security structures.

“Why doesn’t the EU grant such arrangement for Turkey?” Rasmussen said on Saturday, in a pointed demand for Ankara, which provides NATO with one its biggest armed forces, to join the European Defense Agency (EDA), a mainly research and development arm under the European Security and Defense Policy (ESDP).

Rasmussen said that Brussels should also conclude a security partnership with Ankara and involve non-EU countries in decisions affecting its mission to Bosnia.

“Actually Turkey is the second largest contributor to the EU relations in Bosnia. The EU has not provided non-EU contributors with the same possibilities of involvement” in policy and decision-making, he said, adding that it was “essential” it does."  (photo: Virginia Mayo/AP)