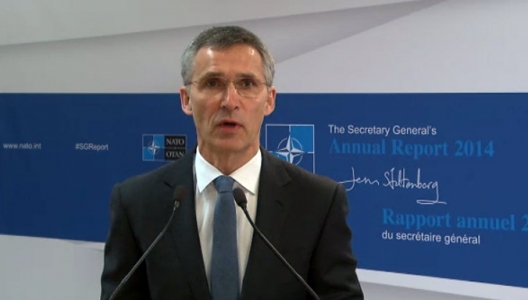 [A]s you can see from our Annual Report, there has been a steady decline in European defense spending since 1990. And the decline continued last year.

In 2014, European Allies spent around 250 billion dollars on defence. A reduction of 7 billion dollars or about 3 percent. Yet last year, we also made an important pledge. To stop the cuts in defence spending, to aim to spend 2% of Gross Domestic Product on defence within a decade, and to spend that money more efficiently.

We still have a serious mismatch between the security challenges we face, and the resources we are dedicating to our defence. And continuing imbalances – both across the Atlantic, and within Europe itself….

[O]ver a period of many years Russia has increased their investments in defence, so they, they have despite of the economic crisis, despite of the financial problems they are facing in Russia now they are still giving priority to defence spending. And during the same period NATO has reduced its defence spending substantially, especially in Europe. In addition to increased defence spending in Russia we see that they have developed capabilities that have increased their ability to conduct for instance snap exercises to deploy tens of thousands of forces within a very limited period or on very short notice, within hours or very few days. And we are also, so in addition to spending more, developing new capabilities, showing high readiness, we have also seen that Russia is willing to use force. We saw that in Georgia, we have seen it in Moldova and we have seen it in Ukraine, in Crimea and eastern Ukraine. And they are continuing to invest in defence and this is course, of course part of the changed security environment we are facing and that’s the reason why, at least part of the reason why we have decided to change our defence posture, to make our forces more prepared, more ready and to increase our presence on rotational basis in the eastern part of the Alliance. With the assurance measures, meaning that we have more planes in the air, more troops on the ground and more ships at the sea and the reason why we have, we are establishing the spearhead force and already this year actually we have established an interim solution for the spearhead force with Germany, the Netherlands and Norway as the main contributing countries….

Excerpts from press conference by NATO Secretary General, Jens Stoltenberg, for the launch of the Annual Report 2014, Jan. 30, 2015.