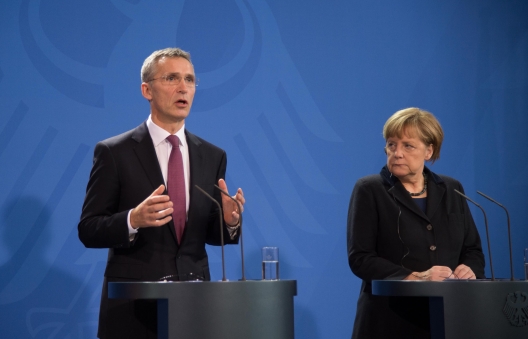 From Secretary General Jens Stoltenberg, NATO:  I also would like to underline that we have to invest more in defence. We agreed to do so at our Summit in Wales. Germany is such a key country in Europe. Germany has the strongest economy in Europe. Germany is providing leadership in so many areas in Europe. But we also are looking for German leadership when it comes to investing in defence. Because we need to invest in our defence to be able to protect all our allies, and to maintain the security and the stability of Europe.

From AFP:  NATO chief Jens Stoltenberg urged Germany on a visit to Berlin Wednesday to mirror its leadership role in Europe as the bloc’s biggest economy in its defence spending.

Describing Germany as a “staunch and important” NATO ally, Stoltenberg stressed the need for members of the US-led alliance to bump up investment amid challenges such as the Islamic State jihadist group or the Ukraine crisis….

At a NATO summit in September in Wales dominated by the fallout from the Ukraine crisis, the 28 alliance leaders committed to increase defence spending to two percent of annual economic output within 10 years….

Germany’s Die Welt daily, which published an interview with Stoltenberg Tuesday, said that Berlin’s defence expenditure was under the NATO target, at 1.3 percent of gross domestic product.