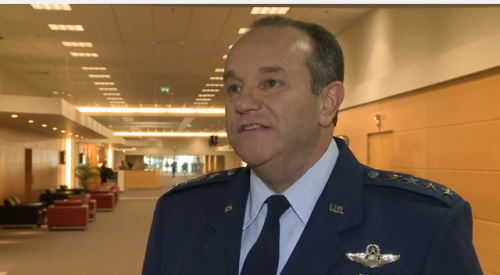 NATO’s top military commander accused Russia on Wednesday of destabilising eastern Ukraine through the use of Russian-backed forces and demanded that it stop interfering.

While a majority of the troops Russia had close to the Ukrainian border – previously estimated by NATO at 40,000 – had withdrawn or were in the process of withdrawing, some appeared intent on staying, U.S. Air Force General Philip Breedlove, NATO’s supreme allied commander Europe, said.

“There are several large formations that are remaining and they have not reduced their presence in any way. Some portion of the force looks like it intends to remain,” he said.

Breedlove said he saw Russia’s hand behind unrest in eastern Ukraine, where pro-Russian separatists have seized control of several towns and are locked in combat with the Ukrainian army.

“Russia is continuing to destabilise Ukraine in other ways. Russian irregular forces, Russian-backed forces, and Russian financing are very active in eastern Ukraine. This has to stop,” Breedlove told reporters on the sidelines of a meeting of NATO defence ministers in Brussels.

“I think what you see in the east part of Ukraine are very well-led, very well-financed, very well-organized clashes with Ukrainian forces … seizing Ukrainian buildings … It is very clear that the Russian influence is a part of this,” he said. . . .

Breedlove said all steps being taken by NATO to reinforce its members in eastern Europe would comply with NATO’s 1997 agreement with Russia, but he accused Moscow of breaking the pact “when they crossed a sovereign boundary and annexed under fire a portion of a sovereign nation”.