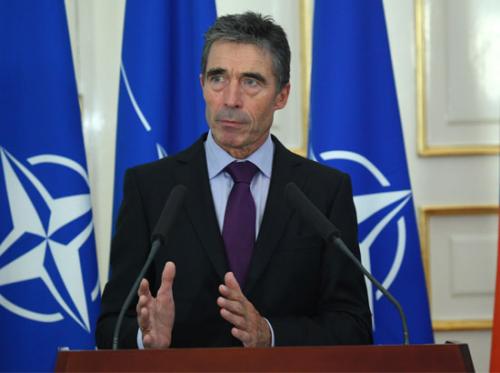 From Anders Fogh Rasmussen, NATO:  I can confirm that we have detected the launch of Scud-type missiles. We strongly regret that act. I consider it acts of a desperate regime approaching collapse. The fact that such missiles are used in Syria emphasises the need for effective defence protection of our ally Turkey. Let me stress that the recent launch of missiles has not hit Turkish territory but of course there is a potential threat and this is exactly the reason why NATO Allies decided to deploy Patriot missiles in Turkey for a defensive purpose only but with the aim to ensure effective defence and protection of the Turkish population and Turkish territory.

From Adrian Croft, Reuters:  A NATO source said there had been multiple launches of Scud-type missiles inside Syria on Thursday morning.

From Saad Abedine and Ivan Watson, CNN:  A Turkish Foreign Ministry official told CNN on Friday that some Scuds had been fired from Damascus toward Aleppo early Thursday.

"As far as I know, (there were) four, (landing) around Aleppo and/or close to our border, but not in Turkey," said the official, who spoke on condition that he not be named because he is not authorized to speak on the record for military matters.

The move is an escalation on the war, which has threatened to draw in neighboring countries and militant groups.

Earlier this month, NATO and a U.S. official accused Syria of using Scuds. Those missiles did not land on the Turkish side of the border but "came close," said the U.S. official, who did not want to be named, citing the sensitivity of the matter.

U.S. military satellites confirmed the infrared signature of the four short-range Scud missiles launched from the Damascus area into northern Syria, according to the official.

Analysts say the government of President Bashar al-Assad maintains up to 400 of the short- and medium-range Russian-developed Scud missiles.  (photo: PanArmenian Photo)