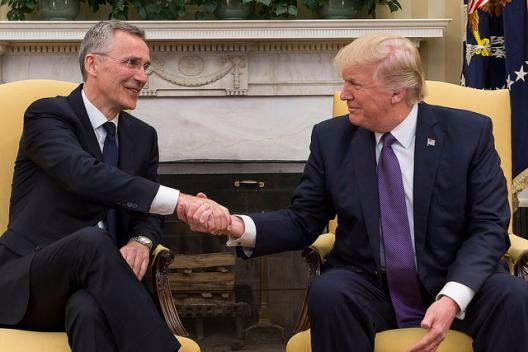 The North Atlantic Treaty Organization is considering appointing a senior official to oversee counterterrorism efforts , a move aimed at meeting one of President Donald Trump’s demands that the alliance focus more on terror threats….

While no NATO country has vocally opposed the idea of a senior counterterrorism coordinator, some diplomats are skeptical about the role’s impact unless alliance members also agree to expand the organization’s counterterror efforts, including funding additional training initiatives….

Allied ambassadors are set to formally discuss the counterterrorism post and other proposals at a May 5 meeting, officials said. Diplomats have been debating various proposals as they prepare for the meeting of allied leaders, including Mr. Trump, later this month. Turkish, British and French delegations have circulated papers.

The U.S. however hasn’t submitted a paper or made any formal requests to the alliance. While Mr. Trump has said he wants the allies to do more on counterterrorism, neither he nor other U.S. officials have stated any specific desires, according to allied diplomats.

Some NATO allies have said privately that without a formal proposal from the U.S., reaching consensus on new counterterrorism plans is difficult.

Some allied military officers have said current training efforts are disjointed and could be better coordinated. While there is currently a midlevel official assigned to coordinating NATO’s various counterterrorism efforts, some officers say a high-level official could expand alliance and national training initiatives….

NATO diplomats said a new department devoted to counterterrorism isn’t under consideration. Instead, the counterterrorism portfolio would be given to an existing NATO official, likely Sorin Ducaru, a Romanian diplomat who is assistant secretary-general for emerging security challenges….

“We have trouble identifying what more NATO could do,” said one European diplomat. “NATO is not the relevant body to do more fighting terrorism.”

One senior diplomat said that while NATO will never be “the first responder,” it can do more to combat terrorism and should continue expanding intelligence sharing on terror threats, such as providing more information about internal threats that could impact the wider alliance.