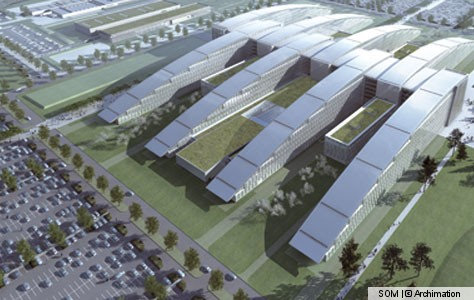 From Slobodan Lekic, the CP:  When President Charles de Gaulle kicked NATO out of France in 1966, the alliance built a temporary home in Brussels in just 29 weeks. Permanent digs should be finished just short of half a century later.

The rabbit warren of prefab housing always looked very temporary but served NATO well in the Cold War years. Now, the alliance is building a state-of-the-art headquarters costing €460 million ($600 million) at a time when NATO’s relevance is increasingly questioned.

Construction will break ground this fall and is scheduled for completion by 2015. NATO’s new home will be situated across the street from its current offices on the outskirts of Brussels.

The long-awaited move now comes at a bad time, years after NATO’s original purpose — to defend Western Europe from a Soviet invasion — evaporated. It also comes amid sharp cuts in defence spending across Europe and while the alliance is struggling to prevail in the Afghan war, its most ambitious mission yet.

But NATO Secretary-General Anders Fogh Rasmussen insists that the organization is not obsolete and that it remains indispensable for regional security. He also says that a new facility is needed to better accommodate its current size, and allow for greater flexibility in the decades ahead.

I welcome the awarding, by the Belgian government, of the contract to build a new NATO Headquarters. When NATO moved into the current Headquarters in 1967, it had only 15 members; today, there are 28 Allies, with more countries aspiring to join.

The new Headquarters, which is planned to be complete by 2015, will be of a sufficient size and flexibility for the new NATO.  It will also use the latest environmental technologies, to be as sustainable and affordable as possible in its operation.

I thank Belgium for providing the land on which the new premises will be built, and for the professionalism with which it has managed this important project.  (graphic: SOM/Archimation)  (NATO HQ Project Background)