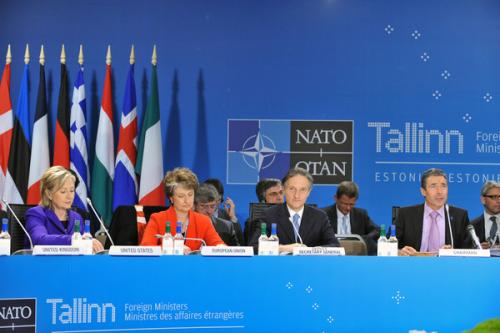 From NATO: Let me finally turn back to last night’s dinner discussions on nuclear issues and missile defence. Yesterday, before the dinner, I gave you my views on these issues. Now the discussion amongst all the Allies has begun, and I expect it to continue right up to November when the new Strategic Concept will be agreed. Let me give you a read out:

Ministers agreed:  that the nuclear issue is important in our work on the new Strategic Concept;

that the Alliance remains, as always, firmly committed to maintaining the security of its members, but at the lowest possible level of nuclear forces;

that a broad sharing of the burden for NATO’s nuclear policy remains essential;

that decisions on our nuclear policy will be made by the Alliance together. Our unity on this will remain absolutely solid.

That NATO must continue to maintain a balance between credible deterrence, and support for arms control, disarmament and non-proliferation;

that missile defence, will not replace deterrence, but can complement it

and finally, that we want cooperation on missile defence with Russia, in a spirit of mutual openness and transparency, for the benefit of all our citizens.