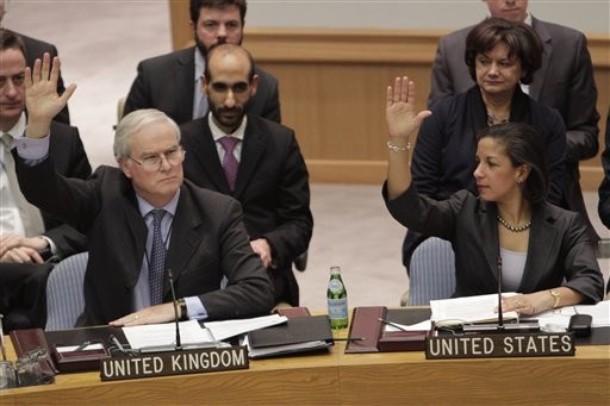 From James Joyner, the New Atlanticist:  This time, "NATO" is not a fig leaf for "the United States." While Afghanistan remains a NATO operation in name, it has long since Americanized on the ground. On Libya, though, France and the UK have very much been leading while the Obama administration has been having a rather public squabble over what to do.

With U.S. forces stretched thin in with unpopular wars in Iraq and Afghanistan, the president is quite apparently not interested in another. And Secretary of Defense Bob Gates put an early damper on intervention when he told the House of Representatives that a "no-fly zone begins with an attack on Libya to destroy the air defenses" and would be "a big operation in a big country."  A week ago, American intelligence chief James Clapper told Congress that it was quite likely the Gaddafi regime "will prevail" given the balance of power.

For once, however, the diplomatic team seems to have won out. Secretary of State Hillary Clinton has been waging a relentless internal battle in favor of intervention and issued what many analysts took to be a shot across the bow earlier in the week when she told CNN’s Wolf Blitzer she would not remain in the administration if there’s a second term.  And UN Ambassador Susan Rice has turned the arguments of Gates and Clapper on their head, saying that if a no-fly zone is inadequate, we’ll simply go further: "We are interested in a broad range of actions that will effectively protect civilians and increase the pressure on the Gadhafi regime to halt the killing and to allow the Libyan people to express themselves in their aspirations for the future freely and peacefully."

So, the objections of those who’ll actually have to fight the war have been dismissed.