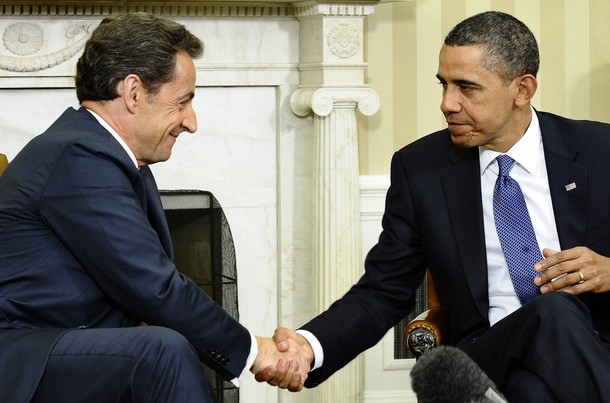 From Dominique Moïsi, the European Voice :  France and the US seem to have switched roles from just a few years ago. Listening to [US President Barack] Obama’s reflexive and distant speeches on Libya, one can nearly hear French Foreign Minister Dominique de Villepin’s flamboyant intervention at the United Nations on the eve of the invasion of Iraq in 2003. And, though the circumstances and the ‘legal’ environment are very different – there is a UN resolution for the Libya intervention, and a vague declaration of support by the Arab League – [French President Nicolas] Sarkozy’s stance reminds some of George W. Bush’s enthusiasm for war. . . .

At the crossroads of this question stands NATO, an organisation perceived as American by Europeans and international (ie, not American) by the average US citizen. But if NATO is – for better or worse – in command on the ground in Libya, it is the UN that has given the necessary green light to French action there.

Yet it is dangerous to believe that the world has found in this new-model Coalition of the Willing the solution that it was seeking in today’s increasingly chaotic post-American order. Neither France nor Britain – not to mention the European Union, which is more divided than ever when it comes to military interventions – can be seen as substitutes for the US. Despite Sarkozy’s exceptional activism, they have neither the means nor, in reality, the will.

Confronted with the world’s increasing complexity and the US’s decreasing appetite for international responsibilities, the need for adequate rules – and for a referee to enforce them – is greater than ever. In the face of growing risks of global anarchy, the courageous but risky activism of France and Britain should not be seen as a substitute for an engaged US. But does such an engaged US still exist? The answer is probably ‘No’.

Dominique Moïsi is the author of “The geopolitics of emotion”. © Project Syndicate, 2011.  (photo: Getty)