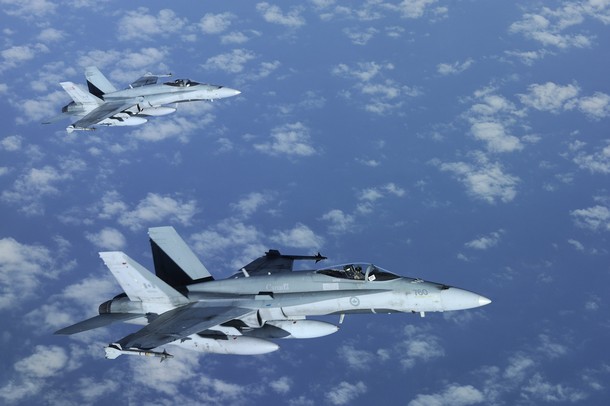 From Ian Traynor and Richard Norton-Taylor, the Guardian: Nato is running short of attack aircraft for its bombing campaign against Muammar Gaddafi only days after taking command of the Libyan mission from a coalition led by the US, France and Britain.

David Cameron has pledged four more British Tornado jets on top of eight already being used for the air strikes. But pressure is growing for other European countries, especially France, to offer more after the Americans withdrew their attack aircraft from the campaign on Monday.

"We will need more strike capability," a Nato official said.

Since the French launched the first raids on Libya 16 days ago, the coalition and Nato have destroyed around 30% of Gaddafi’s military capacity, Lieutenant General Charles Bouchard, the Canadian officer leading the air campaign, told Nato ambassadors. …

Nato officials insisted the pace of the air operations was being maintained. But it has emerged that the US and the French, who have been the two biggest military players until now, are retaining national control over substantial military forces in the Mediterranean and refusing to submit them to Nato authority.

The French have the Charles de Gaulle aircraft carrier, two escorting frigates and 16 fighter aircraft, none of which are under the Nato command and control which was announced last Thursday.

Until last week, President Nicolas Sarkozy was the loudest opponent of handing over the operations to Nato control. Nonetheless, the French are not only taking part in the Nato campaign, but are the biggest non-US contributors, with 33 aircraft, double Britain’s 17. Not all of these are strike aircraft.

Until Monday, the Americans had performed most of the attacks on ground targets, with the French executing around a quarter and the British around a 10th. Given the US retreat, Nato is seeking to fill the gap, but only the British have pledged more. …

The general stressed that no air strikes on ground targets in Libya had taken place outside Nato’s command.

Six countries are believed to be engaged in the bombing campaign – France, Britain, Canada, Denmark, Belgium, and Norway – with many others involved in policing an arms embargo and enforcing a no-fly zone.  (photo: Canadian Forces/Reuters)