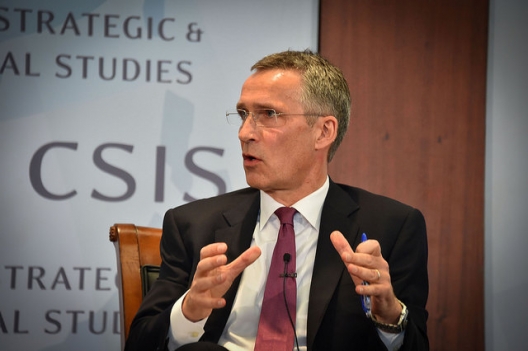 Russia’s recent use of nuclear rhetoric, exercises and operations are deeply troubling. As are concerns regarding its compliance with the Intermediate Nuclear Forces Treaty.

President Putin’s admission that he considered putting Russia’s nuclear forces on alert while Russia was annexing Crimea is but one example.

Russia has also significantly increased the scale, number and range of provocative flights by nuclear-capable bombers across much of the globe. From Japan to Gibraltar. From Crete to California. And from the Baltic Sea to the Black Sea.

Russian officials announced plans to base modern nuclear-capable missile systems in Kaliningrad. And they claim that Russia has the right to deploy nuclear forces to Crimea.

This will fundamentally change the balance of security in Europe.

We learned during the Cold War that when it comes to nuclear weapons, caution, predictability and transparency are vital.

All of this takes place against the background of Russia’s significant rearmament programme. Some of its new military systems were put on parade during this year’s Victory Day celebration. And Russia is deploying many of its most modern systems and basing military units near NATO borders….

These are not random events. They form a bigger picture, which is of great concern. Russia is a global actor that is asserting its military power. Stirring up aggressive nationalism. Claiming the right to impose its will on its neighbours. And grabbing land.

We regret that Russia is taking this course. Because when might becomes right, the consequences are grave.

Excerpts from speech by Secretary General Jens Stoltenberg at the Center for Strategic and International Studies (CSIS), May 27, 2015.