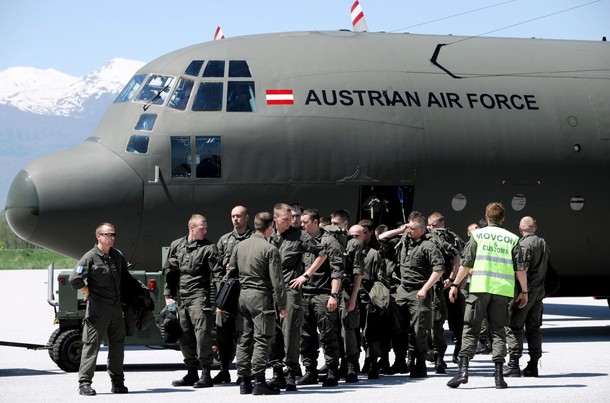 From NATO:  On 11 July, NATO Secretary General Anders Fogh Rasmussen and the ambassadors of all 28 NATO Allies visited KFOR, together with the ambassadors of partner countries which contribute to the mission. They were accompanied by the Executive Secretary General of the European External Action Service, Pierre Vimont. Their visit is a clear signal of their shared commitment to stability and security in the region and a strong expression of support for KFOR in its mission to create a safe and secure environment.

"NATO is fully committed to the stability and security of the Western Balkans – nowhere more than in Kosovo," the Secretary General said at a press conference in Pristina. "For the past 12 years, the NATO-led mission here has helped preserve a safe and secure environment for all people in Kosovo – firmly, fairly and impartially."

During the one-day visit, the delegation met with the Commander of KFOR, Major General Erhard Drews, and with key representatives of the international community in Kosovo to discuss the current political situation. The delegation also had meetings with Mr Hashim Thaci and Mr Slobodan Petrovic.

Speaking after the meetings, the Secretary General stressed that NATO and its international partners in Kosovo are committed to the Euro-Atlantic future of the region. "We all know that the future of the Western Balkans lies in building peaceful cooperation, not a return to the conflicts of the past”, Mr Rasmussen said.

The Secretary General emphasised that the political problems of the region can only be solved by dialogue and reiterated NATO’s full support for the European Union-facilitated talks between Belgrade and Pristina.

The Secretary General and Ambassadors also traveled to Mitrovica to see the results of KFOR’s efforts to maintain a safe and secure environment for the people of Kosovo.  (photo: Getty)