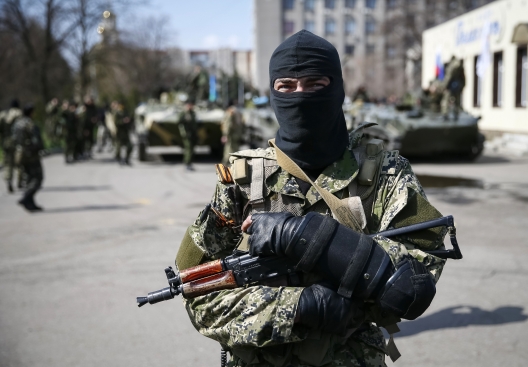 It’s hard to fathom that groups of armed men in masks suddenly sprang forward from the population in eastern Ukraine and systematically began to occupy government facilities. It’s hard to fathom because it’s simply not true. What is happening in eastern Ukraine is a military operation that is well planned and organized and we assess that it is being carried out at the direction of Russia.

President Barack Obama, Chancellor Angela Merkel, Prime Minister David Cameron, President François Hollande, NATO Secretary General Anders Fogh Rasmussen and many others have publicly stated their belief that Russian forces are behind the events in Ukraine. I would like to provide some observations from our analytical experts to help explain why I strongly agree with these world leaders.

The pro-Russian “activists” in eastern Ukraine exhibit tell-tale military training and equipment and work together in a way that is consistent with troops who are part of a long-standing unit, not spontaneously stood up from a local militia.

The weapon handling discipline and professional behavior of these forces is consistent with a trained military force. Rifle muzzles are pointed down, fingers not on triggers, but rather laid across trigger mechanisms.
Coordinated use of tear gas and stun grenades against targeted buildings indicates a level of training that exceeds a recently formed militia.

Video of these forces at checkpoints shows they are attentive, on their feet, focused on their security tasks, and under control of an apparent leader. This contrasts with typical militia or mob checkpoints, where it’s common to see people sitting, smoking, and so forth.

The way these forces target government buildings, hit them in coordinated strikes and quickly secure the surrounding area with roadblocks and barricades is similar to what we’ve seen in Crimea. Again, indicative of a professional military force, acting under direction and leadership, not a spontaneous militia.

Finally, the weapons and equipment they carry are primarily Russian army issue. This is not the kind of equipment that civilians would be likely to be able to get their hands on in large numbers.

Any one of the points above taken alone would not be enough to come to a conclusion on this issue, but taken in the aggregate, the story is clear.

In my blog last month I spoke about the importance of identifying the Russian troops in Crimea. Today, the Russian president has finally admitted that Russian troops were there after denying it repeatedly early on. Also today he claimed that the idea of Russian forces in eastern Ukraine was “rubbish.” I would ask that you keep this in mind as you consider your answer to the question “Who are the men behind the masks in eastern Ukraine, today?”