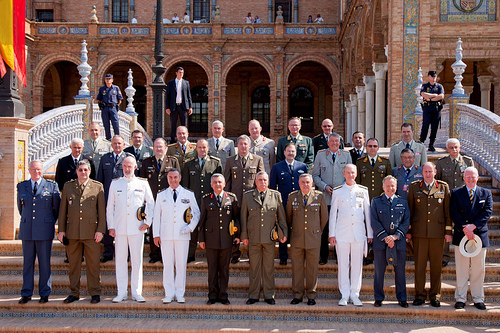 From Civil Georgia:  Visit of the NATO Military Committee to Georgia, originally planned for this month, has postponed, according to Georgia’s ambassador to NATO and government officials.

NATO Military Committee is the primary source of military advice to the Alliance’s civilian decision-making bodies and is made up of senior military officers from NATO member countries.

News about postponement of the visit was first announced by Georgia’s Ambassador to NATO, Grigol Mgaloblishvili, late on November 8.

“In general this is a very important event because all military representatives from 28 member states take part in such visits and it is very unfortunate that the Alliance took such a decision to postpone this visit,” Mgaloblishvili, who was Georgia’s PM for three months in late 2008 and early 2009, told Rustavi 2 TV via phone from Brussels on November 8.

Asked if the decision to postpone this visit was related to the arrest of chief of staff of the Georgian armed forces, Mgaloblishvili responded: “It is natural that when an event of such scale is being postponed it is related to the situation existing in the country. . . .”

Chief of Joint Staff of the Armed Forces, Brigadier-General Giorgi Kalandadze was arrested on November 7 on charges involving alleged abuse of soldiers in October, 2011 when he was deputy chief of army staff. Commander of 4th brigade of the armed forces, Zurab Shamatava, and former defense minister Bacho Akhalaia were also arrested in connection to the same case, although Akhalaia also faces other charges as well. . . .