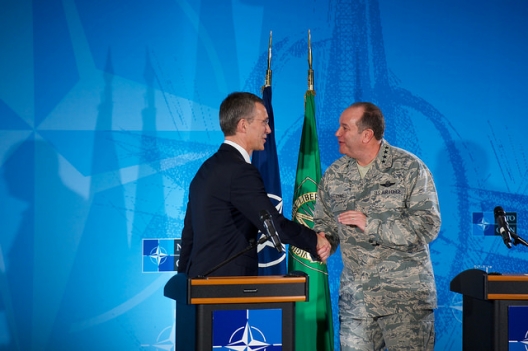 From Kathrin Hille and Sam Jones, Financial Times:  Nato this week prepares to grant significant new powers to the alliance’s military chief to deploy troops, a move that currently requires a decision from all 28 Nato allies. Nato is also looking at ways to improve logistics across Europe, for example by striking agreements to use civilian railway companies and having the ability to close down roads and motorways or take over airports.

Officials at the alliance said the new measures were purely defensive but they wanted to speed up Nato’s response to crises. This includes detailed logistical and tactical questions about how Nato would transport thousands of troops, tanks and material to battlefields — issues the alliance has not had to address on its home soil since the cold war.

“We are discussing decision making and we have to find a way to reconcile military efficiency with political control,” Nato secretary-general Jens Stoltenberg told the FT.

From Jens Stoltenberg, NATO:  The second decision I expect ministers to make related to how we are increasing the readiness and the responsiveness of our forces, is that we will speed up our political and military decision-making to enable a rapid deployment of the NATO Response Force, while maintaining full political control.

To further promote faster decisions, we will have more detailed and advanced plans which is key to be able to deploy forces quickly.

We are giving our Supreme Commander, SACEUR, more authority to prepare our troops for deployment and get them ready to go once the political decision is made.