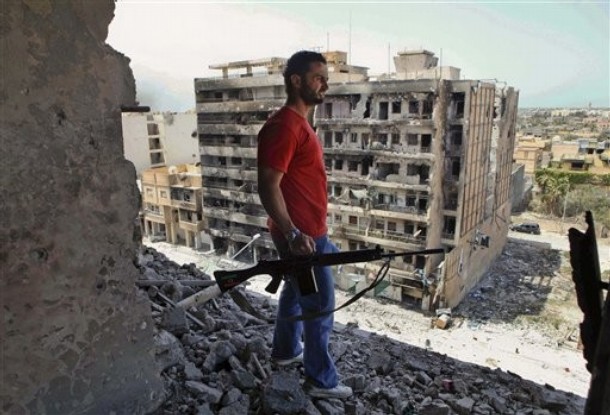 From the Editors of the New York Times:  Unless NATO, including the United States, get more serious, Libya’s liberation war could turn into a prolonged, bloody stalemate. Col. Muammar el-Qaddafi is ruthless, and rebel forces are weak and disorganized. NATO still has the military means to help tip the balance if it can summon the unity and the will. . . .

President Obama was right to hand over this mission to Canadian and European command once the initial American strikes had shattered Libyan air defenses. But crucial momentum was lost in the transition. Coordination with rebel fighters was initially poor, leading to friendly fire disasters. The string of defections from the Qaddafi inner circle came to an end, as government forces dug in.

NATO allies, particularly Britain and France, have the high performance fighters that can carry the main burden of the air campaign. But the Pentagon needs to send America’s specialized low-flying attack planes, the A-10 and the AC-130, back into action against Libyan Army tanks. These are far more effective at destroying enemy vehicles and avoiding friendly ones. . . .

And NATO needs to start speaking with one clear voice. We were pleased to hear Turkey’s prime minister, Recep Tayyip Erdogan, finally declare that Colonel Qaddafi must “immediately step down.” But Chancellor Angela Merkel of Germany remains on the sidelines. All of the public squabbling has played into Colonel Qaddafi’s hands, reinforcing his claims that NATO doesn’t have the stomach or the sticking power.  (photo: AP)