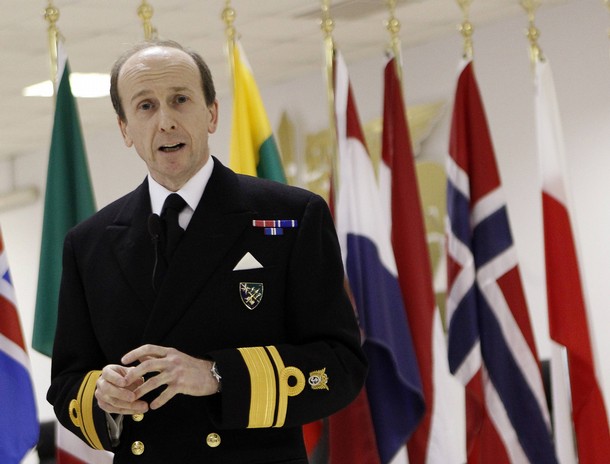 From Slobodan Lekic, the AP:  NATO acknowledged Friday that its airstrikes had hit rebels using tanks to fight government forces in eastern Libya, but said it would not apologize for the deaths because no one told them the rebels had tanks.

British Rear Adm. Russell Harding, the deputy commander of the NATO operation, said in the past, only forces loyal to Libyan strongman Moammar Gadhafi had used heavy armored vehicles.

Harding says the military situation between Libya’s eastern coastal towns of Brega and Ajdabiya remains fluid, with the two sides engaged in a series of advances and retreats, making it difficult for pilots to distinguish between them.

NATO jets attacked a rebel convoy between these two towns Thursday, killing at least five fighters and destroying or damaging a number of armored vehicles.

The strikes, including an attack earlier this week, provoked angry denunciations of NATO by the rebels. At the same time, NATO officials have expressed frustration with the Libyan insurgents, who now view the alliance, whose mandate is limited to protecting civilians in Libya, as their proxy air force. …

"It would appear that two of our strikes yesterday may have resulted in (rebel) deaths," Harding told reporters in Naples, where the alliance’s operational center is located.

"I am not apologizing," he said. "The situation on the ground was and remains extremely fluid, and until yesterday we did not have information that (rebel) forces are using tanks."

From Anders Fogh Rasmussen, NATO:  This is a very unfortunate incident. I strongly regret the loss of life. The situation on the ground is very fluid. We have seen in the past that tanks have been used by the Gaddafi regime to attack civilians.

We are conducting operations  in Libya in accordance with the UN Security Council Resolution with the aim to protect civilians.  This is also the reason why our aircrafts target military equipment that could be used to attack civilians, but I can assure you that we do our utmost to avoid civilian casualties.