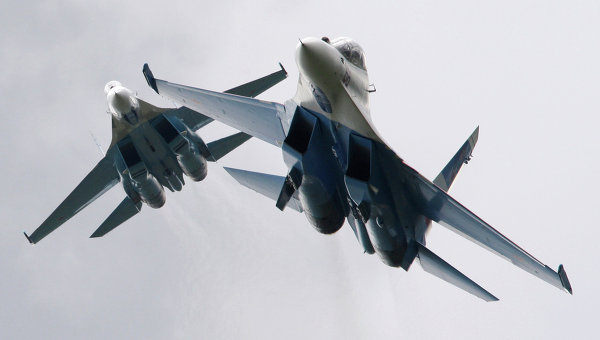 From RIA Novosti:  NATO declined to comment on Wednesday on a report saying it could use Russian Sukhoi Su-27 fighters at a Cold War-era base in Iceland for training purposes.

The Financial Times reported on Monday the Icelandic government is in talks on renting an airbase to a private company, ECA, that says it is buying up to $1.5 bln of Sukhoi Su-27 warplanes from Belarus for use as a mock enemy in military training exercises. …

"We have studied this interesting report, but cannot comment because we do not have official information on the issue at hand," an official at the NATO headquarters in Brussels who requested anonymity said.

According to Mr ten Cate, ECA has agreed to buy 15 Sukhoi Su-27 “Flanker” jets from BelTechExport, a Belarusian arms export company, with the option of 18 more. If completed, it would be the biggest sale of fighter aircraft to a private buyer and the first large-scale import of Russian-made warplanes into a Nato country.

Iceland’s government has so far taken ECA seriously – so much so that some of the end-user certificates needed to import the jets have already been issued, according to officials.

From Andrew Ward, the Financial Times:  A few similar companies, such as Airborne Tactical Advantage Company of the US and Top Aces of Canada, offer a similar service using older Israeli, French and US jets. But, if all goes to plan, ECA’s will become by far the biggest and newest fleet of its kind. The aircraft are to be backed up by ground equipment, including radar and communications jamming technology and simulated surface-to-air missile systems, to create realistic training conditions.  (photo: Anton Denisov/RIA Novosti)