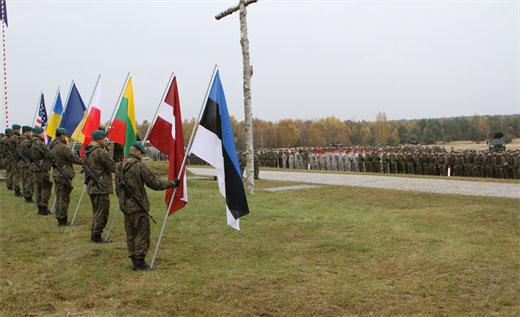 From John-Thor Dahlburg, AP:  NATO this week is holding its biggest war game in years, and the Russians aren’t happy it’s happening so near their borders. . . .

Moscow has voiced displeasure the war game is being held in Poland and the former Soviet Baltic republics. Rasmussen says NATO has invited Russian observers to come see that the exercise is not “directed against Russia.”

From Anders Fogh Rasmussen, NATO:  I don’t see any reasons for those Russian concerns. The exercise, Steadfast Jazz, is not an exercise directed against Russia. It’s a NATO exercise with the aim to test the NATO Response Force and test our ability to work together.

Exercise Steadfast Jazz takes place in Poland and Latvia because Poland, as well as the three Baltic states, offered to host this year’s Steadfast Jazz exercise. But let me remind you that we have conducted a lot of Steadfast Jazz exercises during recent years. Actually I think 17 exercises taking place in 14 different countries. And as I mentioned, we’re already now planning a new exercise to take place in 2015, which will be hosted by three countries in the southern part of Europe; namely Italy, Spain and Portugal.

So these exercises take place in different places within NATO territory, which I think is quite normal. And finally, we have provided full transparency. We have invited Russian observers to have a look at the exercise. So we have nothing to hide. The Russians can see with their own eyes that this exercise is meant to test our ability to work together; it’s not directed against Russia.