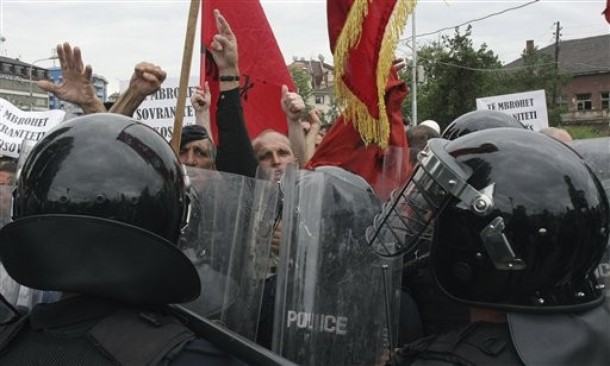 From Reuters:  NATO peacekeeping troops and police fired teargas on Sunday to separate thousands of ethnic Albanians and local Serbs in the divided Kosovo town of Mitrovica during protests against Serb local elections. …

"We have used a small ammount of teargas and intervened to stop groups of Serbs and Albanians and prevent a further escalation of violence," said Kosovo police spokesman Besim Hoti.

Two people on the Serb side were slightly injured by rocks the two groups of protesters were hurling at each other, health authorities in the Serb part of Mitrovica said.

"Together with NATO troops and EU police we are trying the prevent more incidents," Hoti said.

Ethnic Albanians, led by veterans of the 1998-99 war against Serbian forces, rallied to protest against the local election in the three Serb-dominated municipalities in northern Kosovo where Pristina has no control.  (photo: AP)