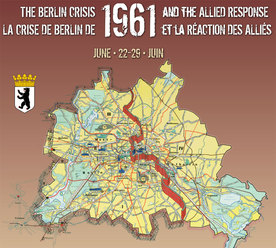 From NATO:  The NATO Archives is proud to announce the public disclosure of the documents on the NATO planning for a Berlin emergency during the Cold War. The files, consisting of close to four hundred declassified Council documents and correspondence spanning the years 1961 to 1968, present a treasure trove of information for researchers, librarians, students and anyone with an interest in the political and military history of this era.

The release of these documents on the NATO Archives website marks the first time that declassified and publicly disclosed NATO files will be presented on the Internet for consultation and download. (www.nato.int/archives/berlin)

The public disclosure of these NATO documents also coincides with the 50th anniversary of the construction of the Berlin Wall.  It was only towards the end of 1961 that the Alliance decided to play a more active role.  The North Atlantic Council tasked the NATO Military Authorities to draft a series of top secret contingency plans to prepare for the possibility of a Berlin Emergency.  SACEUR’s Berlin Contingency (BERCON) Plans involved ground and air actions along the access routes and air corridors to Berlin, and also included the possible demonstrative use of nuclear weapons. SACLANT’s Maritime Contingency (MARCON) Plans proposed putting pressure on the Soviet bloc though worldwide maritime measures.

To celebrate this release, the NATO Archives has organized a series of events to commemorate this pivotal moment of the Cold War: a screening of the 1962 NATO-produced film ‘Background to Berlin’, a seminar featuring presentations by noted historians, a commemorative booklet, and in cooperation with the German Delegation at NATO, a multimedia exhibition focusing on the Berlin Crisis, the Wall and the Allied Response. The exhibition opens on 22 June 2011, with the official opening ceremony taking place on 23 June 2011 at 13h.

For online access to these documents on Berlin, as well as other forthcoming documents please visit the NATO Archives website at: www.nato.int/archives.

For complete access to the thousands of other declassified documents that have been publicly disclosed, researchers and others interested in the history of the Organization are welcome to visit the NATO Archives Reading Room at NATO HQ in Brussels.  (graphic: NATO)