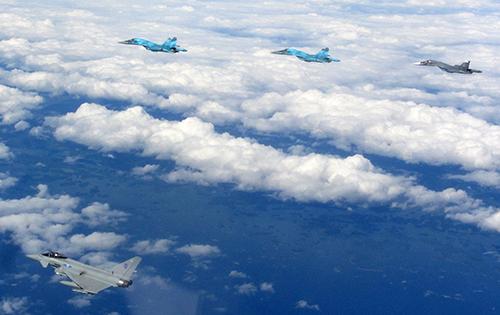 World powers are reporting surges in airspace violations and instances where aircraft are scrambled to intercept foreign jets, amid a sharp rise in geopolitical tensions in Europe and Asia.

Nato member aircraft were forced to conduct more than 500 scrambles over Europe in 2014 – a fourfold increase on the previous year. Nearly 85% of these were to intercept Russian aircraft. This year, there have already been more than 300 scrambles, according to data provided by Nato to the Guardian. These are some of the highest numbers since the end of the cold war.

A scramble doesn’t imply a breach of sovereign airspace or military aviation rules. In fact, in most cases, there is no breach. Last year, there were 10 incursions by Russian aircraft into airspace belonging to Nato members. Eight of these were over islands belonging to Estonia (six over remote Vaindloo alone). The others were into Norwegian and Polish airspace in March and April respectively, and both lasted seconds.

There have been no incursions recorded by Nato’s 28 members in 2015. A Russian aircraft did, though, briefly enter airspace belonging to Finland, which is not a Nato member, on 26 June. While Swedish armed forces have counted nine incursions into Sweden’s sovereign airspace so far this year. The country’s airspace was breached 12 times last year….

What is clear is there has been an increase in Russian activity. In comparison with current levels of activity, there were, for example, only seven Russian incursions into Estonian airspace between 2006 and 2013.

Russian activity has included several more provocative – albeit isolated – incidents. These have included aircraft flying several times over military ships and bombers taking unconventional paths in proximity to US, Portuguese and British airspace.