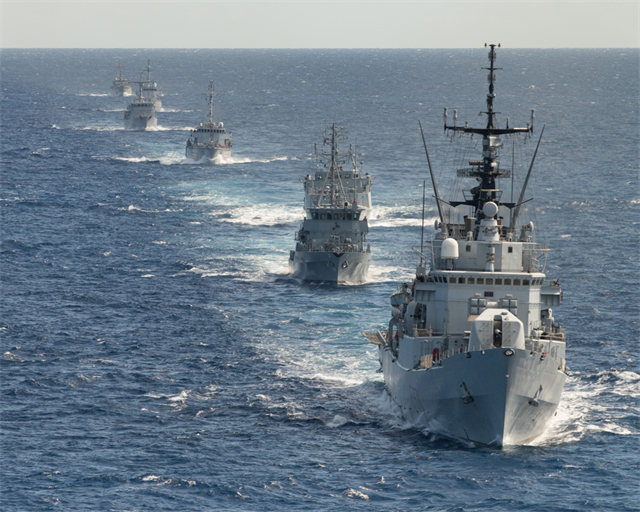 This week I had the distinct pleasure to stand alongside my fellow military and civilian NATO leaders on the deck of the ITS Cavour to observe its highly trained crew demonstrating their remarkable capabilities. The Italian aircraft carrier, equipped with modern technology typical of today’s warships, manoeuvred deftly off the coast of Sardinia, Italy along with 22 other ships as part of exercise Brilliant Mariner 13. This large scale exercise began on 23 September and includes a total of 13 allies testing capabilities such as replenishment at sea, medical evacuation and vessel boarding as well as air defence and anti-surface naval artillery.

Brilliant Mariner 13 will conclude on 6 October having played an important role in certifying the Italian Navy’s capacity to lead the maritime component of the NATO Response Force. The NRF, with air, land and sea components from multiple nations must be certified and ready to respond rapidly when called. Exercise Steadfast Jazz in November will serve as the final part of the certification of this joint and combined force. . . .

Although exercises are vital to readiness, NATO’s naval forces do much more than prepare for action, they conduct real world missions every day, most prominently in the Mediterranean with Operation Active Endeavour (OAE) and off the east coast of Africa with Operation Ocean Shield (OOS). With four standing maritime fleets NATO maintains the ability to project and sustain naval power just about anywhere it might be needed.

To watch over this vast and critical part of our military force I count on our team at the Allied Maritime Command (MARCOM) Headquarters, in Northwood, United Kingdom, under the able command of Royal Navy Vice Admiral Peter Hudson, who serves as the prime maritime advisor to the Alliance. With just over 300 officers, petty officers and civilians, MARCOM provides command and control for the full spectrum of joint maritime operations and tasks. This is a tremendous responsibility especially in NATO’s current complex and demanding maritime environments. . . .

Operation Active Endeavor (OAE) is NATO’s other major ongoing maritime mission. It is also the result of NATO’s first-ever invocation of Article V of the Washington Treaty, the clause that governs the Alliance’s collective defence, following the attacks on the United States on 11 September 2001.

OAE is a maritime surveillance operation led by NATO’s naval forces to detect, deter and protect against terrorist activity in the Mediterranean through monitoring, patrolling, escorting and compliant boarding. Many non-NATO partner countries have also contributed to OAE in support of NATO’s operational activities against terrorism. Now, under the command of Spanish Navy Rear Admiral Diaz Del Rio, Standing NATO Maritime Group ONE is currently deployed in support of OAE.

I am extremely proud to lead these extraordinary warriors of the sea and to help guide the most connected multi-national naval force the world has ever known. But whether we are conducting real world operations or exercises, we in NATO are never complacent. We are constantly learning and will continuously strive to improve.