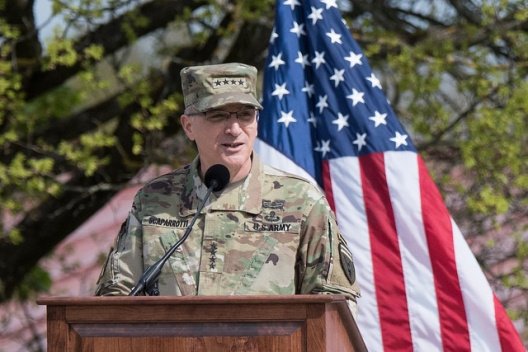 NATO has a new supreme commander, whose job is to strengthen it as a defense force after years of reductions of U.S. troops in Europe.

“We face a resurgent Russia and its aggressive behavior that challenges international norms,” U.S. Army General Curtis Scaparrotti said earlier this week upon taking command of U.S. forces in Europe.

He added that the Atlantic alliance’s forces must be “ready to fight should deterrence fail.”

Scaparrotti became supreme allied commander Europe at a May 4 ceremony at NATO’s military headquarters near Mons, in southern Belgium.

His appointment comes at a time when the alliance regards Moscow as a threat to stability over its actions in Ukraine and has largely given up on military or civilian cooperation with Russia.

Scaparrotti has said he will press Washington to station a third permanent brigade of U.S. troops in Europe to bolster the two brigades presently deployed in Germany and Italy. Any additional permanent deployment of troops would reverse reductions over the past four years, during which Washington deactivated two brigades in Europe due to budget pressures and new threats in the Middle East and Asia.

Today, there are fewer than 65,000 U.S. military personnel permanently stationed in Europe, down from roughly 300,000 during the Cold War.