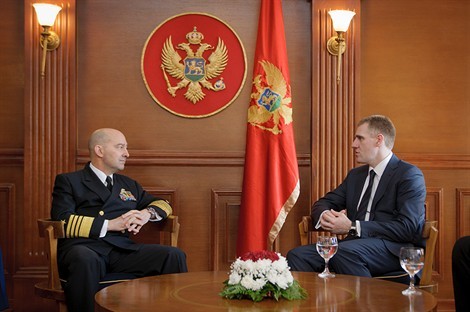 From the AP:  NATO’s top commander said Wednesday that Montenegro will soon fulfill the military requirements to become a member of the Western alliance. . . .

“Militarily, they’re ready to go,” [U.S. Navy Adm. James] Stavridis said, indicating that the decision will not be made by generals but by NATO’s political leadership. . . .

“However, I expect discussions about Montenegro’s application and progress being made toward membership,” Stavridis said.

From the Office of the Prime Minister of Montenegro:  Montenegro has made tremendous progress in attaining NATO’s objectives and pursuing reforms of its security system, Prime Minister Igor Lukšić and Admiral James G. Stavridis, US European Command chief and NATO Supreme Allied Commander, concluded at a meeting earlier today.

PM Lukšić thanked Admiral Stavridis for continued support that USA provide to Montenegro, in particular during the recent state of emergency, as well as for the NATO member states’ solidarity. He also thanked him for the practical trainings in the area of building capacities of the country’s security system.

Admiral Stavridis praised Montenegro’s track record in its security system reform and its commitment to fulfilling Euro-Atlantic requirements. He noted that if Montenegro carries on that way, its efforts will be acknowledged and rewarded with NATO membership. . . .