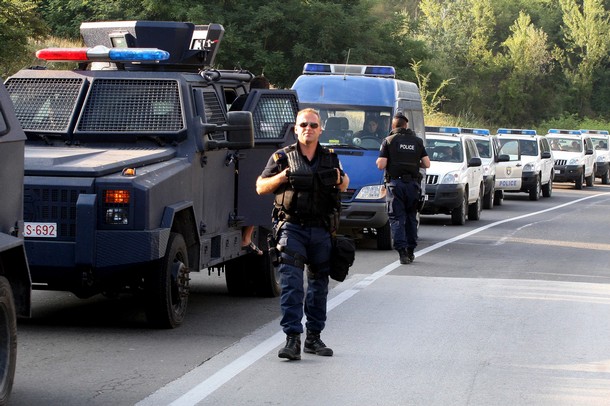 From Nebi Qena, the AP:  Kosovo’s special police forces that moved into the country’s disputed north overnight to extend the government’s writ at borders with Serbia will withdraw as part of a deal between Kosovo and Serbia and mediated by NATO , a spokesman for the military alliance said Tuesday. . . .

The overnight operation by Kosovo’s special police units was criticized by the European Union, which is currently mediating normalization talks between the former foes, and is likely to inflame tensions in the region that remains disputed over a decade after the end of Kosovo’s war.

Lightly armed special police units in riot gear crossed into the Serb-dominated area late Monday and took control of one border post, before being blocked by local Serbs on the way to the other crossing point.

About 6,000 NATO troops are still deployed in Kosovo following the end of the war in 1999, when the military alliance bombed Serb troops out of this former Serbian province, following their brutal crackdown on ethnic Albanian separatists.

NATO spokesman Cpt. Hans Wichter said regular police are expected to assume control of border crossings and more ethnic Albanian officers would be assigned to monitor the crossings alongside Serb members of the force.

The operation follows a decision by Kosovo’s authorities to impose a ban on goods coming from Serbia in retaliation for a similar measure imposed by Serbia on Kosovo goods.  (photo: Getty)