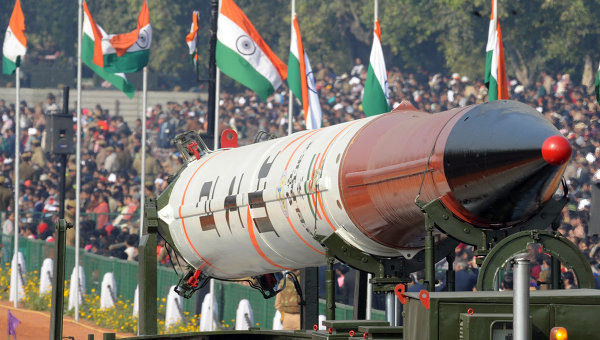 Q: Sebastian Moffett from Reuters. Could you talk a little bit about the threats against which missile defence program is supposed to defend and in particular in the areas planning to test nuclear ballistic missile apparently? And could you say whether this increases the perceived threat from other countries’ missiles?

ANDERS FOGH RASMUSSEN (NATO Secretary General): Let me stress that the NATO missile defence system is not directed against any country. It’s directed against a threat, a real missile threat. And we do not consider India a threat to NATO Allies or NATO territory.

From Simon Denyer, the Washington Post:  India successfully test-launched a long-range missile on Thursday that would give it the capability for the first time of sending a nuclear warhead as far as China’s capital, Beijing, officials said. . . .

“Today’s successful Agni-V test launch represents another milestone in our quest to add to the credibility of our security and preparedness,” Prime Minister Manmohan Singh said in a statement. Defense Minister A.K. Anthony called it an “immaculate success.”

“India has emerged from this launch as a major missile power,” he said.

Speaking at a news conference at NATO headquarters in Brussels, Rasmussen said the Alliance does not consider India as a threat to NATO allies and territory.