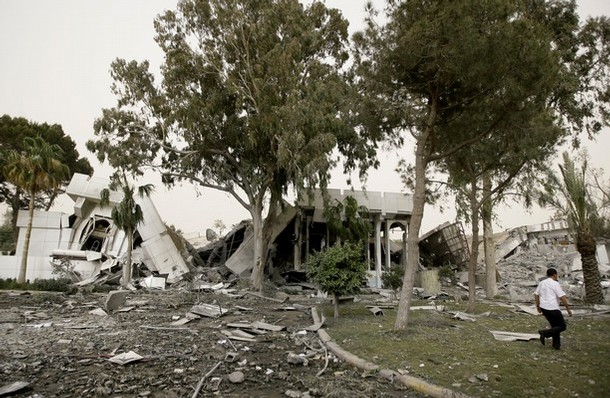 From Thom Shanker, the New York Times:  NATO planners say the allies are stepping up attacks on palaces, headquarters, communications centers and other prominent institutions supporting the Libyan government , a shift of targets that is intended to weaken Col. Muammar el-Qaddafi’s grip on power and frustrate his forces in the field. . . .

In interviews, NATO officials acknowledged that overall, their air campaign had been frustratingly slow in taking shape after a vigorous start. But they said it was following a carefully planned step-by-step progression spanning the front lines, the middle echelons of the supply chain and now the rear areas, mostly in the capital, where the centralized command and control institutions are located. . . . .

“After the early attacks on his integrated air-defense systems, the next stage was to stop the pro-Qaddafi forces that were schwacking the villages and cities,” one NATO official said. “You have to stop the bleeding. Only then can you treat the wound. . . .”

Military officials privately acknowledge that removing Colonel Qaddafi from power is the desired secondary effect of striking at state television and other symbols of his authoritarian rule. “His people may see the futility of continued resistance,” one Pentagon official said.

On Tuesday, Lt. Gen. Charles Bouchard, the operational commander of the NATO mission, told reporters at his headquarters in Italy that alliance intelligence officers were picking up reports of Libyan government soldiers abandoning their positions. “We are well aware of troops not reporting for duty,” he said.  (photo: Getty)