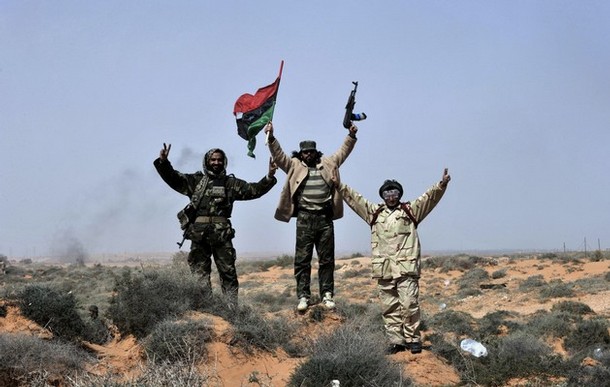 From Spencer Ackerman, the Danger Room:  The NATO military alliance may have reached consensus on taking over the Libya war. But the members of the transatlantic partnership spent Tuesday sending all types of mixed signals about whether to take the next step in ousting Moammar Gadhafi: giving the opposition guns.

In Brussels, the alliance’s civilian leader firmly backed off that option in an interview during CNN. “We are not in Libya to arm people,” said Anders Fogh Rasmussen, “but to protect people.”

That contradicted the U.S. ambassador to the United Nations, Susan Rice. “We’ve not, certainly, ruled that out,” Rice told ABC’s George Stephanopolous, who said that the U.S. has “an important interest in seeing Gadhafi step down.”

Rice’s push to keep the option of arming the Libyan opposition alive got a high-profile boost in London from Secretary of State Hillary Rodham Clinton. “Our interpretation” of the United Nations Security Council resolution authorizing the war holds that “there could be legitimate transfer of arms if a country were to choose to do that,” Clinton said after the international conference on Libya. She was quick to add that “we have not made that decision at this time.”  (photo: Getty)