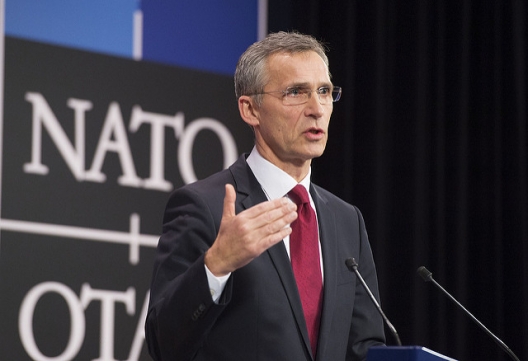 A stronger NATO-EU cooperation will also strengthen the European defence and I welcome the decision made yesterday by the defence ministers and foreign ministers of the EU on the implementation of security and defence of the global strategy and my message has been, since I became Secretary General of NATO, that Europe has to do more, Europe has to step up, Europe has to invest more in defence and that is what we see is happening so I welcome that after many years of cuts in defence spending Europe is now increasing defence spending as a response to a more dangerous and more challenging security environment. This has been my message since I became Secretary General and I will continue to convey the strong message of more defence spending in Europe to respond to a more challenging security environment.

Question 1: Julian Barnes, WSJ: Mr. Secretary General, in your op-ed you talked about the relationship between Europe and America being based on shared values. Mr. Trump has talked about a more transactional relationship based on increased spending. Are you worried that Mr. Trump’s election is going to change the basis of the alliance, change the dynamic of the alliance?

Secretary General: President-elect Donald Trump stated during the election campaign that he is a big fan of NATO and I am certain that he will be a President of the United States which will live up to all of the commitments of the United States in the alliance, because a strong NATO is important for Europe but it is also important for the United States. He also pointed out the importance of increased defence spending – but Europeans are stepping up their efforts to invest more in defence – and I absolutely agree with him that has been a message from American leaders, US leaders for many years. And the good thing is that we now see that Europeans are actually investing more in defence, they are investing more in defence in Europe and they are also contributing to a fairer burden-sharing.