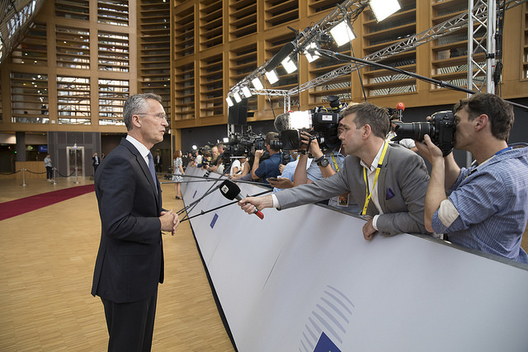 We should have no illusions, Europe and North America need each other especially now when we see security threats, challenges we haven’t seen for many decades. We have to stand together, Europe and North America. And NATO-EU cooperation is part of this transatlantic relationship, and therefore I also look very much forward to signing a joint declaration between President Juncker, President Tusk and me before the NATO Summit.

Question: Secretary General, … [inaudible] reporting this morning that at the G7 Summit, President Trump said to his G7 counterparts here that it will be an interesting Summit, referring to the upcoming NATO Summit, because NATO is as bad as NAFTA, it’s much too costly for the US. You’ve heard the reports about the worry leading up to this Summit. What’s your reaction to this quote from the US President?

Jens Stoltenberg: I’m absolutely confident and certain that President Trump is committed to NATO. He has stated that in many meetings with me, but also publically. But more importantly, he has proven his commitment to NATO not only in words, but also in deeds. After Trump became President of the United States, the US funding for US military presence in Europe has increased by 40%. So, the United States is increasing its military presence in Europe, with more troops, more exercises, more prepositioned equipment. So, what we see is that both Canada and North America are stepping up their presence in Europe, and European Allies are also doing more together. So, I’m confident that at the Summit, with President Trump and all the other leaders, next month in NATO, will make important substantive decisions on how to strengthen the transatlantic bond within NATO.

Question: About the Putin-Trump Summit, what’s your reaction to that?

Jens Stoltenberg: I welcome the upcoming meeting between President Trump and President Putin because I believe in dialogue and NATO’s approach to Russia is what we call a dual-track approach. It is defence and dialogue. For me, dialogue is not a sign of weakness; dialogue is a sign of strength. And, after two years with no meetings in what we call the… or in the NATO-Russia Council, we have been able to reactivate that Council as a platform for dialogue between NATO and Russia. And therefore, I think it’s absolutely, totally in line with NATO policies to talk to Russia, to meet with Russian leaders. We don’t want a new Cold War, we don’t want to isolate Russia, we want to strive for a better relationship for Russia and therefore I welcome the meeting between… [interrupted by question]….

Question: Are you worried that it’s going to be a symbolic meeting?

Jens Stoltenberg: I think it is important to meet because, since Russia is our biggest neighbour, we need to work for a better relationship with Russia. And there is no way we can improve the relationship with Russia without meeting Russia. Dialogue is not a sign of weakness; dialogue is a sign of strength. And NATO’s approach to Russia is what we call a dual-track approach, meaning defence and dialogue. And as long as we are strong, as long as we are united, we can talk to Russia. That’s also my experience as Norwegian politician. I was Prime Minister of Norway, a small country bordering Russia. We were actually able to work with Russia on many issues: on border issues, military issues, environment, energy, not despite NATO but because of NATO, because as long as we were part of a strong military alliance we were able to talk to Russia.

Excerpts from doorstep statement by Secretary General Jens Stoltenberg at a meeting of the European Council, June 28, 2018.