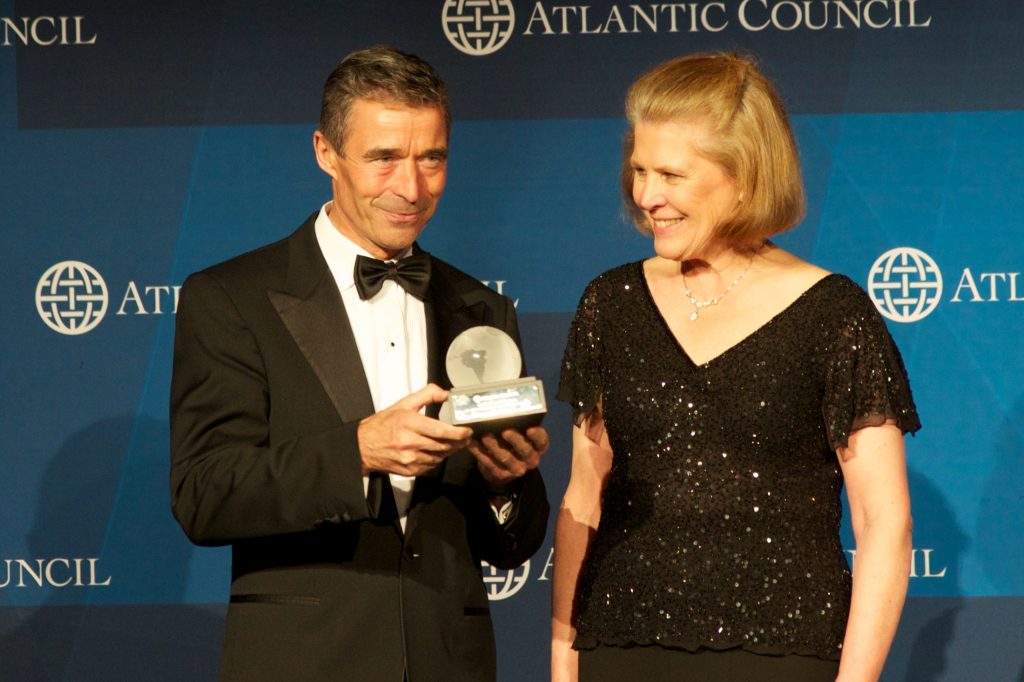 From NATO:  Anders Fogh Rasmussen received a Distinguished International Leadership Award from the Atlantic Council of the United States for his service both as NATO Secretary General and as Prime Minister of Denmark on Wednesday (1 May 2013) in Washington DC. At the dinner and awards ceremony, attended by around 800 international guests, the Secretary General called on Europe and North America "to do more with each other, not less; to come closer, not drift apart; to turn outwards, not inwards."

“The transatlantic relationship is vital for the freedom, security and prosperity of Europe and North America and it provides the bedrock of the rules-based global order,” the Secretary General said in accepting the award. He set out the need for "a new transatlantic deal," based on stronger economic, cultural and people-to-people ties; a wider engagement with the rest of the world; and an even deeper security cooperation. Mr. Fogh Rasmussen said that the bonds that were forged with the creation of NATO over 60 years ago had to be revitalised to meet new security challenges, stressing that "we must continue to invest in NATO and we must all shoulder a fair share of the burden just as we all share in the benefits.”

Every spring the Atlantic Council of the United States hosts a distinguished international leadership award ceremony to honour selected individuals for their leadership as pillars of the transatlantic community. This award is the highest honour granted by the Atlantic Council. This year, Hillary Clinton also received a Distinguished International Leadership Award. Previous recipients include Ban Ki-moon, Bill Clinton, George H.W. Bush and Tony Blair.

On Thursday (2 May 2013), the NATO Secretary General is visiting US Cyber Command, to meet General Keith B. Alexander, Commander US Cyber Command, and other senior US officials. In response to the rapidly growing cyber threats, Allied leaders decided at the 2010 Lisbon Summit to bolster NATO’s cyber defence efforts.  (photo: NATO)