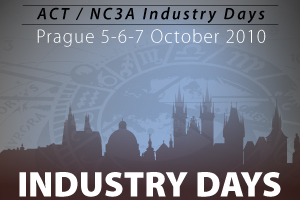 From NC3A:  At the Industry Conference, NC3A officials have announced that during the next two years a range of potential business opportunities of up to as much as EUR 930 Million may be available, pending the approval of the Nations.

Senior officials from the NATO Consultation, Command and Control Agency (NC3A) briefed close to 300 industrial representatives from Europe and North America at the NC3A industry conference held in Prague, 6-7 October.

Some of the investments are contingent on the outcome of the upcoming Lisbon Summit of NATO Heads of State and Government, such as missile defense, where a new strategic concept for the Alliance will be agreed.

From Reuters:  One area where NC3A wants to increase spending is cyber defence, where the total value of orders might go up to 35 million euros in next several years.

"Earlier, the attacks were by individual hackers that wanted to show themselves. Now it’s by serious organisations and we are being probed constantly," he told Reuters.  (photo: NC3A)