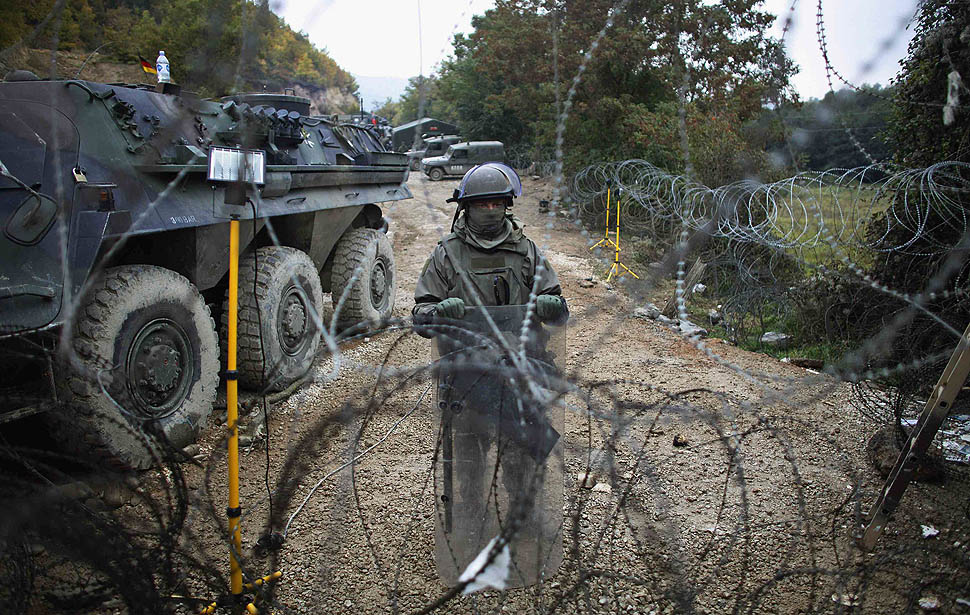 From Laurence Norman, Wall Street Journal:  Fourteen years after North Atlantic Treaty Organization troops first entered Kosovo to end fighting between ethnic Serbs and ethnic Albanians, there is still no “Mission Accomplished” sign in sight. The volatile situation in the Serb-dominated north of Kosovo, the failure of the European Union’s police force to win broad support from the population, and the limitations of Kosovo’s own under-staffed and poorly resourced institutions mean NATO’s KFOR security mission still counts 5,565 troops, including 700 held in reserve.

NATO has been hoping to halve its presence for a couple of years now. But weeks of ethnic clashes in the summer of 2011 in Kosovo’s north delayed that move. Last year, ethnic violence diminished but significant force reductions by the EU police force, EULEX, and concerns about the election of nationalist-leaning Serbian President Tomislav Nikolic in May dissuaded NATO from further rocking the boat. Not even the resumption of EU-brokered top-level talks last fall between Serbia and Kosovar leaders have stymied security worries. . . .

Privately some NATO officials complain that part of the problem is EULEX itself – or at least the member states that fund the 2,097-strong EU rule-of-law mission. There was disquiet when the 25% cut in EULEX staff went ahead last year. Others say EULEX – or the governments that stand behind it — lack the “political will” to tackle some of the corruption, organized crime and trafficking problems that have plagued Kosovo, especially in the north.

That’s a view echoed elsewhere. Last October, German Defense Minister Thomas de Maizière called for a complete overhaul of EULEX’s staffing and mandate saying he was “not satisfied” with their work. Germany is KFOR’s largest contributor providing almost a quarter of its troops. Meanwhile, a report by the EU’s independent Court of Auditors said that large-scale EU spending on EULEX had produced only limited progress in the fight against crime and corruption – and almost none in securing the rule of law in Kosovo’s north.   (photo: Marko Djurica/Reuters)