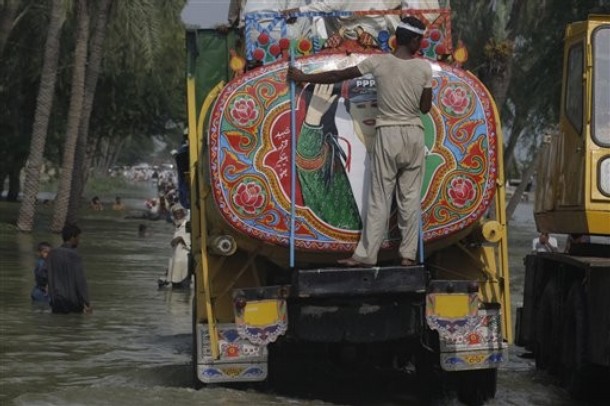 By Rob Crilly, Telegraph (UK): Pakistan transport officials said long lines of trucks with food, fuel and equipment for troops were caught up in a 30-mile tailback on the main highway from Karachi to Islamabad as floodwater in the south of the country had reduced traffic to single file.

Pakistan is the major supply route for equipment destined for 141,000 Nato forces in Afghanistan, with some 5000 lorries a month travelling through the Khyber pass on their way to the border and Kabul beyond.

However, hauliers say they are struggling to get their vehicles through.

“Supply to the Nato forces via the border at Torkham has decreased by 80% due to the floodwaters,” Ashraf Khalil, vice president of the Khyber Pakhtunkhwa Transporters Association.

A second route, through Balochistan, to Kandahar Air Base in southern Afghanistan has also been badly affected.

A spokesman for the American embassy in Islamabad said supplies were still getting through and that the floods would not affect the safety of service personnel in Afghanistan.

“There’s no disruption that would influence any of our operations at that sort of level,” he said.

The disruption to Pakistan’s road network is so extensive that there is massive demand for helicopters and air transporters. The United Nations said yesterday that it was struggling to reach 800,000 people cut off by monsoon rains. Officials estimated that the UN needs at least 40 more helicopters to stave off hunger and disease among flood victims. The US military has sent scores of helicopters to Pakistan and even the Afghan military has sent a helicopter from its fleet.

America has said it will redirect part of a five-year $7.5bn aid package to flood reconstruction.

Rajiv Shah, the head of the US Agency for International Development, said the aid — designated for improving schools and hospitals, building dams and helping the country generate electricity — would now be spent on flood rebuilding, so long as Pakistan could show it would spend funds in a responsible manner.

“We are going to work at it, but these are tough economic times around the world and it will require a demonstration of real transparency and accountability and that resources spent in Pakistan get results,” he said before travelling to visit aid camps yesterday. (Photo credit: AP.)